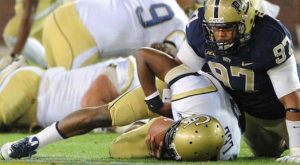 The redshirt freshman QB threw for 3,820 yards, an FBS freshman record, and 38 touchdown passes in leading Florida State to a No. 1 ranking in the final regular season BCS poll. He has one more game remaining, the VIZIO BCS National Championship where he will lead the Seminoles against No. 2 Auburn on Jan. 6. He is also on pace to break the NCAA record for passing efficiency (190.6)

Winston, the second player from FSU to win the Camp award, was also honored with the Davey O’Brien Award as the nation’s best quarterback. He beat out A.J. McCarron of Alabama and Texas A&M’s Johnny Manziel. Winning the O’Brien award is a good omen for Winston. Six of the past seven winners have won the Heisman Trophy.

Alabama’s McCarron was named the winner of the Maxwell Award, given to the nation’s most outstanding player as voted by sportwriters and head coaches. McCarron is the first player from Alabama to ever win the award, which has been given out annually since 1937.

Boston College’s Andre Williams, also a Heisman finalist, was named the Doak Walker Award winner. Williams, who led the nation with 2,102 yards rushing, is the first BC player to win the award. Williams won over Arizona’s Ka’Deem Carey and Washington’s Bishop Sankey.

Oregon State’s Brandin Cooks won the Biletnikoff Award as the nation’s best receiver while Darqueze Dennard of Michigan State took home the Jim Thorpe Award as the best defensive back in the nation. Auburn’s Gus Malzahn was named the Home Depot Coach of the Year after leading Auburn to a 12-1 regular season and the national championship game.

Aaron Donald of Pittsburgh won both the Outland Trophy as the nation’s outstanding interior lineman and the Bednarik Award as the top defensive player. Earlier in the week, Donald was named the winner of the Lombardi Award and the Bronko Nagurski Trophy. The senior had 26.5 tackles for loss and 10 sacks for the Panthers.

The college football awards culminate with the presentation of the Heisman Trophy this Saturday at 8 p.m.