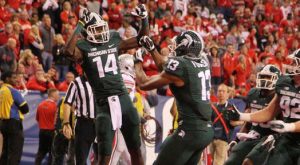 It was a wonderful College Football championship Saturday with a shootout in the SEC title game, an upset in the Big Ten final, and even the Big 12 added some excitement. With the results, selection Sunday should be interesting.

Auburn’s Tre Mason ran for an SEC Championship game record 304 yards on 46 carries and scored four touchdowns to lead the Tigers to wild 59-42 victory over Missouri. The win, coupled with Ohio State’s loss in the Big Ten Championship, most likely moves head coach Gus Malzahn and his Auburn squad into the BCS title game.

Auburn racked up 677 total yards, an amazing 545 on the ground, but didn’t pull away until early in the fourth quarter on Mason’s one-yard TD run. He iced the game with a 13-yard TD with just over four minutes to play.

In the Big Ten Championship, Michigan State did the improbable and held the Ohio State offense in check most of the night and defeated the Buckeyes, 34-24. The Spartans went up 17-0 in the first half and had OSU on its heels. But, Buckeyes QB Braxton Miller proved why he is one of the best dual-threat quarterbacks in the country and scored on two TD runs and threw a 20-yard TD to Philly Brown to rally Ohio State and take a 24-17 lead late in the third quarter.

The Spartans answered, though, as QB Connor Cook threw a 9-yard TD pass to Josiah Price and RB Jeremy Langford added the icing with a 26-yard run with 2:16 to play. It was the 12th win for Michigan State, the most in school history. They will play in the Rose Bowl for the first time since 1987 as a result of their win. The loss was the first for Urban Meyer since he took over as head coach, the first in 25 games.

The Big 12 provided some excitement in the college football world as Oklahoma traveled to rival Oklahoma State and pulled off the upset as QB Blake Bell rallied the Sooners to a 33-24 win. The victory ended the Cowboys’ hopes of winning a second Big 12 title in three years and also ended any shot at a BCS bowl bid.

After Oklahoma State took the lead with 1:46 to play on a Desmond Roland one-yard run, Bell drove the Sooners 66-yards in eight plays capping the drive with a 7-yard TD pass to Jalen Saunders with just 19 seconds remaining. The win means that Baylor becomes the Big 12 champion and the Sooners may have earned a BCS bowl bid with the upset.

Elsewhere, Florida State had no trouble with Duke in the ACC Championship, defeating the Blue Devils, 45-7. Seminoles QB Jameis Winston, who will most likely win the Heisman Trophy, threw for 330 yards and four TDs in the win.

Stanford, who will be Michigan State’s opponent in the Rose Bowl, won the Pac-12 championship with a 38-14 win over No. 11 Arizona State. It will be the second straight Rose Bowl for the Cardinal.