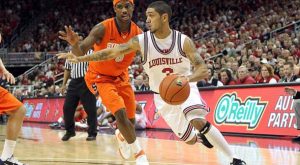 It was much different than Thursday as all four games in the NCAA Tournament’s Sweet 16 were decided by five points or less. Defending champion Louisville fell to Kentucky and Michigan, Michigan State, and Connecticut all advanced to the Elite Eight.

Louisville (31-6) led for most of the game but could not hold on when it mattered. Kentucky (27-10) held the lead in the game for all of 65 seconds, hit a couple free throws down the stretch, and claimed a 74-69 win over the Cardinals. Aaron Harrison, who finished the game with 15 points, hit a three-pointer with 39 seconds remaining to claim the lead for the Wildcats. Fellow freshman Julius Randle hit a pair of free throws and head coach John Calipari’s squad is headed to the Elite Eight.

Branden Dawson scored 24 points and grabbed 10 rebounds to lead Michigan State to a 61-59 win over No. 1 seed Virginia. The Spartans defense outplayed that of Virginia holding the Cavaliers to 35 percent shooting for the game.

Joe Harris and Malcolm Brogdon each scored 17 points for Virginia, which finishes its season 30-7.

The Spartans move on to the regional finals where they will face UConn, an 81-76 winner over Iowa State. It will be the eighth trip to a regional final since 1999 and MSU is 6-1 in those games.

UConn got a huge night from junior DeAndre Daniels. The 6-foot-9 forward scored 27 points, 19 of which came in the second half, to lead the Huskies. The UConn backcourt of Shabazz Napier and Ryan Boatright combined for another 35 as the Huskies return to the Elite Eight. Napier, the American Athletic Conference Player of the Year, had 19 points and Boatright added 16.

Iowa State star Melvin Ejim picked the wrong time to play his worst game of the season. Ejim didn’t score until the second half and finished 3-of-13 from the floor with seven points and eight rebounds. Dustin Hogue picked up the slack and hit 15 of his 19 attempts to lead the Cyclones with 34 points. DeAndre Kane added 16, nine assists, and eight rebounds. Playing in their first Sweet 16 since 2000, Iowa State had to play with Georges Niang who broke his foot in the first game of the tourney.

No. 2 seed Michigan almost blew a 15-point lead but prevailed over Tennessee, 73-71, to advance to the Elite Eight. Jordan McRae of the Vols hit a driving layup with 10.8 seconds to go to cut the Michigan lead to 72-71. The Vols then forced a turnover on the ensuing inbounds play. Jarnell Stokes was called for a charge on UT’s next possession.