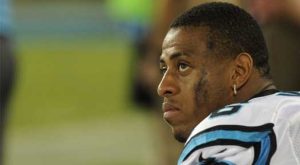 The Carolina Panthers defeated the Detroit Lions, 24-7, Sunday afternoon at Bank of America Stadium in Charlotte. The Minnesota Vikings were blown out by the New England Patriots on Sunday. They were two of 16 NFL games this weekend. They are noteworthy for a pair of players who did not step on the field Sunday.

Panthers defensive end Greg Hardy and Vikings running back Adrian Peterson did not play in their teams’ games on Sunday. Hardy was convicted on charges of domestic violence this summer, and Peterson, the league’s MVP just three years ago, was indicted in Texas on charges of child abuse.

Amid the recent Ray Rice fiasco, the National Football League is taking some serious heat for its handling of such issues. Rice, of course, was suspended indefinitely by the Baltimore Ravens and had his contract terminated after a video was released of him striking his then-fiance in an elevator in Atlantic City last February.

The release of the video by TMZ Sports on Sept. 8 led to Rice’s immediate suspension and brought up questions about when the league and its commissioner Roger Goodell saw the video. The video clearly shows Rice punching Janay Palmer, now his wife, and Palmer crashing to the floor unconscious.

Goodell admitted the league mishandled the whole Rice incident which led to the NFL’s new domestic violence policy which was put into effect just as teams were finishing training camp this year. The problem is that Rice isn’t the only one.

Hardy was convicted on domestic violence charges after authorities found that he choked his then-girlfriend and then threatened to kill her. Hardy received 18 months of probation and 60 days in jail, which was suspended. Hardy claims he is innocent and has appealed the guilty verdict. The Panthers were all set to play Hardy until late this week when the heat on the league was turned up.

Peterson’s situation is a little different in that it involved his four-year-old son. Allegedly, Peterson struck his son with a tree branch sometime this summer as a form of punishment. The punishment reportedly led to numerous injuries to the young boy. After the indictment on Sept. 13, the Vikings announced that Peterson would be inactive for Sunday’s game against the Patriots.

What will the league do? Goodell has already admitted the league blew it with the handling of the Ray Rice incident. What is scary for Goodell and league executives is that there are more of these cases out there.

If the NFL wants to maintain its standing as the premier sports league in the U.S. and hold on to its image, it is going to need to do something…and quickly.