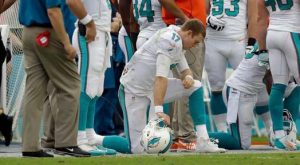 The last week of the NFL season proved to be an exciting one as several spots were still up for grabs in both the AFC and the NFC. Defending Super Bowl champion Baltimore needed to win to stay alive but couldn’t manage to pull one out as division rival Cincinnati wound up as the No. 3 seed in the AFC with a 34-17 win over the Ravens.

The Bengals will welcome the San Diego Chargers next Sunday in the wild card round. The Chargers earned the final spot in the AFC with a comeback overtime win over Kansas City. The Chiefs, who rested most of their starters, led 24-14 early in the fourth quarter, but QB Philip Rivers rallied the Chargers. The Chiefs’ Ryan Succop missed a 41-yard field goal as time expired and sent the game into overtime. The Chargers had the ball almost the entire extra period and kicker Nick Novak hit a 36-yard field goal for the win.

The Chargers were aided by a Miami loss to the New York Jets. The Dolphins needed just one victory in their last two games but managed only seven points in the final two weeks of the season. They lost 19-0 to Buffalo a week ago and the Jets handed QB Ryan Tannehill and company a 20-7 defeat on Sunday.

The Pittsburgh Steelers took care of business defeating the Cleveland Browns, 20-7, as running back Le’Veon Bell broke Franco Harris’s rookie record for yards from scrimmage. The Steelers would have made the playoffs with a Chiefs victory but instead will be left out of the postseason.

The Chiefs will be the No. 5 seed and travel to No. 4 Indianapolis next Saturday in the other wild card round game in the AFC. Denver, which beat Oakland 34-14, earned the top seed and New England, a 34-20 winner over Buffalo, is No. 2. Denver’s Peyton Manning set new NFL records for passing yards and touchdown passes in a season in the win over the Raiders.

In the NFC, Seattle locked up the No. 1 seed and Carolina, which beat Atlanta 21-20, will be the No. 2 seed. The rest of the field was, much like the AFC, determined by the final week of the regular season.

San Francisco defeated Arizona to claim the No. 5 seed. The 49ers will travel to Green Bay next Sunday in the wild card round.

Drew Brees threw for 381 yards and four touchdowns as New Orleans defeated Tampa Bay, 42-17. With the victory, the Saints grabbed the sixth and final spot in the NFC playoffs.

The Saints opponent will be Philadelphia, which had to beat division rival Dallas to claim the NFC East crown and the league’s No. 3 seed in the playoffs. The Eagles held the Dallas offense, which was without starting QB Tony Romo, in check and RB LeSean McCoy rushed for 120 yards on 25 carries as Philadelphia held off the Cowboys 24-22.