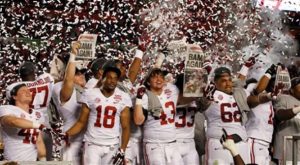 Winston was, for the most part, a non-factor in the first half when he completed just 6-of-15 passes for 62 yards. But, the Heisman Trophy winner proved he is something special by going 6-for-7 on the game’s final drive, including the TD pass to the 6-foot-5-inch Benjamin. Winston finished the game 20-of-35 for 237 yards and two touchdowns.

Auburn jumped all over the Seminoles early in the game, surprising not only Seminoles head coach Jimbo Fisher, but the entire nation as well. Tigers QB Nick Marshall hit Melvin Ray on a 50-yard scoring strike and then scored on a 4-yard run late in the first half to give Auburn a commanding 21-3 lead.

Florida State finally put some semblance of an offense together late in the half and RB Devonta Freeman scored on a 3-yard run to make the halftime score 21-10. The drive was aided by a fake punt which gave the Seminoles some much needed momentum. Winston’s 21-yard run put the ball on the three to set up Freeman’s TD.

With the game on the line, Winston and the Seminoles proved they were the nation’s best in the fourth quarter. Winston connected with Chad Abram for an 11-yard score to cut the lead to 21-20. Auburn responded with a Cody Parkey 22-yard field goal with 4:42 remaining in the game.

Then, the fireworks began. On the ensuing kickoff, Levonte Whitfield took the ball at the goal line and promptly returned the kick 100 yards for a Florida State touchdown. More importantly, the score gave the Seminoles their first lead, 27-24, of the game.

Auburn, though, would not fold. Running back Tre Mason, who ran 34 times for 195 yards, would score on a 37-yard run with just 1:19 to play. Auburn, which went 3-9 a year ago, was a little over a minute away from its second national title in four years, leading 31-27.

Winston had other ideas and led the Seminoles on the 80-yard game-winning drive. Florida State was aided by a pass interference penalty on Auburn’s Chris Davis, which placed the ball at the two-yard line. Winston found Benjamin on the next play.

It was the biggest comeback in a BCS title game and the first time a team that trailed at the half came back and won. After struggling much of the game, Winston was 9-for-11 for 117 yards in the fourth quarter. Auburn managed 449 yards of offense, 232 on the ground, against the vaunted Seminoles defense. The Tigers sacked Winston four times and held FSU to 148 yards rushing. It was the final BCS national championship game. Beginning next season, the national champion will be decided by the new College Football Playoff.