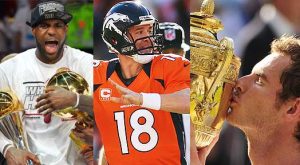 As we head into a new year, let’s take a moment and reflect on some the highs, and lows, of the 2013 year in sports.

The Blade Runner Saga
In February, Oscar Pistorius, who had become the first disabled athlete to compete in the Olympic Games, was charged with murdering his girlfriend Reeva Steenkamp. Pistorius, known as “Blade Runner,” ran in the 400 meters at the 2012 Summer Olympics on his prosthetic legs. He is currently out on bail with a trial set for March 2014.

Heat Win Again
The Miami Heat went on a tear last season and then cruised through the playoffs to claim a second straight NBA title. LeBron James was awarded the NBA Finals MVP for the second straight year. He was also the regular season MVP, the fourth such award of his career.

Aaron Hernandez
The former New England Patriots TE was indicted by a grand jury for the murder of Odin Lloyd. In June, police began investigating Hernandez in connection with Lloyd’s death. It was not the first run-in with the law for Hernandez, who now faces a murder trial and a civil wrongful death suit in 2014.

Armstrong Finally Admits
Cycling superstar Lance Armstrong finally announced what most everyone knew, or thought they knew, already. In an interview with Oprah Winfrey back in January, Armstrong admitted that he used doping. Armstrong retired from cycling in 2011 and in 2012 he was banned from the sport for life. He was also stripped of his seven Tour de France titles.

Boston Marathon Bombings
In April as the annual Boston Marathon was nearing completion, two bombs exploded killing three people and injuring 264 more. Both bombs were detonated near the finish line. A manhunt ensued for two terrorists. One was killed; the other taken into custody where he remains today.

Andy Murray Breaks Drought
Murray became the first Brit to win Wimbledon in 77 years. Murray beat Novak Djokovic in straight sets back in July to become the first British man since Fred Perry in 1936 to win at Wimbledon. His feat earned him the BBC Sports Personality of the Year in England.

Unbelievable Manning
In his 16th season in the NFL, QB Peyton Manning had his best season. He established new NFL records for passing yards (5,477) and touchdown passes (55) in a season. He led his Broncos to a 13-3 record, another AFC West title and the No. 1 seed in the AFC playoffs.

NFL Settles Lawsuit
Just prior to the beginning of the 2013 season, the NFL and more than 4500 former players settled a concussion-related lawsuit. As a result of the settlement, the league claims no wrongdoing and awards the players $765 million.

Another Freshman Wins Heisman Trophy
Florida State QB Jameis Winston led the Seminoles to a perfect season and a berth in the BCS title game. He also faced some legal troubles, accused of a sexual assault in 2012. After an investigation, Winston was not charge with any crimes and went on to win the Heisman Trophy.