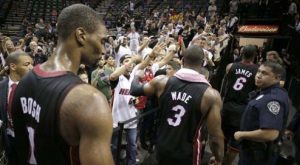 When the media proclaimed the Big Three – LeBron James, Dwayne Wade, and Chris Bosh – was over, they forgot one thing. Nobody told the three Miami Heat stars.

The Big Three woke up in Game 4 of the NBA finals when James erupted for 33 points, Wade scored 32, and Bosh added 20 in a 109-93 Miami win over San Antonio. James had struggled to get of 20 points in the games 1-3 while Wade’s 32 was 11 points over his highest scoring game in the playoffs. Bosh’s 20 would match his highest scoring playoff game this season and he also recorded 13 rebounds to finish off his double-double.

The 85 points by the Big Three was the difference in what was otherwise a tight game until Miami pulled away in the second half. Spurs’ guard Tony Parker scored all of his 15 points in the first half as the teams went to the locker room knotted at 49-49. Parker, who has been battling a leg injury, missed all four of his second half shots and did not score again. He did finish with nine assists.

After hitting an NBA finals record 16 3-pointers in Tuesday’s win in Game 3, San Antonio managed just 16 3-point attempts in Game 4. The Spurs also committed 19 turnovers, something they normally don’t do. With the Big Three on fire, San Antonio had to be perfect and they were far from it.

James shot 15-for-25 and also had 11 rebounds. Wade was 14-for-25 and he also had six rebounds and six steals. With his performance, Wade becomes the just the second player in NBA history – Isaiah Thomas was the other – to score at least 30 points and have six steals in an NBA finals game.