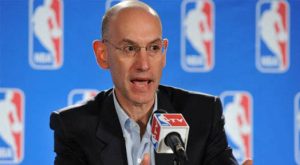 At the NBA’s annual two-day spring meetings last week, one of the big discussions between new NBA commissioner Adam Silver and the 30 franchise owners involved raising the league’s minimum age limit to 20. Currently, players cannot enter the league until they have been out of high school for at least one season. There is one big reason why Silver and the owners want to change that – MONEY!

Sure, we will hear all of the good that comes from forcing young student-athletes to stay in school. Players now cannot enter the NBA draft immediately following high school. Many, like Duke’s Jabari Parker or Kansas’ Andrew Wiggins, play one season of college basketball and then move on to the league.

What many may not realize is that many of the elite players are near the age of 20 by the time they play a year of college basketball and declare for the NBA draft. In this year’s draft class, Kansas center Joel Embiid, for example, is already 20 years old. Syracuse point guard Tyler Ennis is 19, but will be 20 in August well before the start of the regular season.

So, why would the NBA want to mandate that players be 20 years of age before being eligible for the draft? It really comes down to money.

Consider the following. A player is drafted out of high school at the age of 18. He signs his rookie contract and is eligible to renegotiate an extension at 21. That will be his first really big contract and will most likely be a four-year deal.

That means when the player is 25 he will become a free agent. He gets another crack at a huge contract and a long-term deal. Another four-year contract means he’ll become a free agent when he is 29. At that age, he would still command a boatload of money in the free agent market. A player drafted at 18 out of high school will have the opportunity to negotiate three large contracts before he is 30.

If this scenario sounds familiar, it is because it is exactly what has happened to LeBron James. Kobe Bryant also was able to negotiate three large contracts after being drafted at age 17.

If the league gets its way, players entering the league will have two chances at free agent money before they are 30. A rookie’s first opportunity at free agency would not come until he is 24, and the second would come at 28 or 29. A 30-year-old-plus free agent just doesn’t command the kind of contract that a 24- or 28-year-old does and the NBA could then limit the number of times an individual player has the opportunity for a large free agent contract.