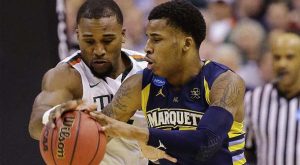 The field of 68 for the NCAA men’s college basketball tournament was revealed Sunday evening and the Florida Gators, the nation’s No. 1-ranked team, was chosen as the tourney’s No. 1 overall seed. The Gators, now 32-2, will be the top seed in the South Regional and will face the winner of the First Four play-in game between Albany and Mt. St. Mary’s.

Florida has won 26 games in a row. They have not lost since early December when they lost to a 12th-ranked Connecticut team by one point, 65-64. Their only other loss of the season was at Wisconsin in November. The Badgers are a No. 2 seed in the NCAA tourney.

Villanova, ranked No. 3 in the nation coming into championship week, lost in the Big East tournament to Seton Hall on a last-second jump shot that killed their hopes of a top seed. The Wildcats, at 28-4, will be the No. 2 seed in the East Region and will play the University of Milwaukee in their first game.

Kansas, which like Villanova, lost in its conference tournament, is the No. 2 seed in the South Region. The Jayhawks (24-9) actually lost three of their last five games during the season but grabbed a second seed based on their RPI, which ranked them third in the nation.

Michigan, which lost in the Big Ten tournament championship to in-state rival Michigan State, joins Wisconsin as a No. 2 seed. The Wolverines, 23-7, will face Wofford, champions of the Southern Conference tourney, in the opening round.

Michigan State was somewhat of a surprise. At 23-8 and champions of the Big Ten tourney, the perennial power Spartans earned a No. 4 seed in the East Region. The biggest surprise was the seeding of American Athletic Conference champion Louisville. The Cardinals, last year’s national champions, shared the regular season title with Cincinnati and then ripped through everyone in the conference tournament. At 26-5 and ranked No. 5 in the nation, coach Rick Pitino’s squad was given a No. 4 seed. They will face 13th-seeded Manhattan in the first round.