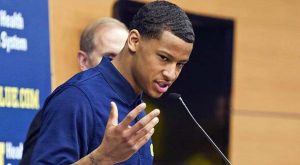 With the NCAA college basketball season over and the championship trophy secure with coach Rick Pitino and the Louisville Cardinals, there has been a flurry of activity among college stars and their intentions about the NBA. So far, several of the biggest names in college basketball have declared for the NBA draft in June.

Michigan’s Trey Burke, the Naismith Award winner as the nation’s top player, decided to give up his final two seasons in Ann Arbor and take his game to the NBA. The Big Ten Player of the Year averaged 19.2 points and 6.7 assists per game in leading the Wolverines to the NCAA final. A 6-1 point guard, Burke projects as a first-rounder in the mold of Chris Paul.

Also from the Big Ten is Indiana’s big man, 7-footer Cody Zeller who led the Hoosiers in scoring (16.9 ppg) and rebounding (8.2 rpg) on the way to leading head coach Tom Crean and company to a regular season league title. Zeller, a sophomore, is the rare big man that can play inside and can also step out and shoot from the perimeter. His teammate, 6-5 guard Victor Oladipo, also declared his intention to leave Indiana and enter the draft. Oladipo averaged 13.6 points and 6.3 rebounds per game last season.

The Big East Player of the Year, Otto Porter Jr., will leave Georgetown after two seasons. The 6-8 forward led the Hoyas with 16.2 points per game and averaged 7.5 rebounds a game. Another Big East star, Michael Carter-Williams, the Syracuse point guard, declared for the draft as well. Carter-Williams has tremendous size (6-6), can score (12 ppg) and distribute the ball (7.7 assists per game).

Ben McLemore, Kansas’ exciting freshman, will enter the draft following a season in which he averaged 16.4 points and 5.3 rebounds per game. McLemore is a pure shooter but also has great athletic ability. He was a finalist for the Wooden Award even though he was just a freshman.

Possibly the biggest surprise of the early college entries into the NBA draft was the decision by Kentucky’s Nerlens Noel who tore the ACL in his left knee back in February in a game against Florida. Noel, like McLemore, is just a freshman but at 6-10, he was the SEC Rookie of the Year and the SEC’s Defensive Player of the Year. Before the injury, Noel was projected as the No. 1 pick in the draft. Most speculate that his stock will not be affected that much due to the injury.