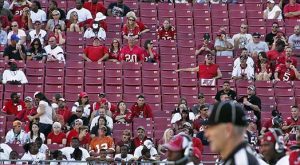 You know that odd occurrence on a Sunday when you are all prepared to watch your favorite NFL team and then you realize the game is not on? That just might come to an end. The NFL blackout rule could be going by the wayside soon as the Federal Communications Commission (FCC) voted for a proposal to end blackouts on Wednesday.

Blackout rules prevent a game from airing in a local market if the game is not a sellout. The rules were instituted in the 1960s and many believe that the rules now are somewhat out of date. In the early days of blackouts, ticket sales were the main source of revenue for teams and sports leagues, like the NFL. Currently, that is not the case as TV revenue is one of the biggest sources of league revenue. Networks televising NFL football games pay nearly $3 billion each year to broadcast games.

The blackout rule was always a point of contention for larger stadiums such as Ralph Wilson Stadium in Buffalo. The stadium, formerly known as Rich Stadium, has one of the larger seating capacities in the league. During the Bills’ run of Super Bowl contenders in the 1980s and ‘90s, the stadium held over 80,000. On any given Sunday, a Bills home game had to sell 80,000 tickets in order for the game to be aired locally. For a home game in Chicago (Soldier Field), only 62,000 tickets must sell.

Finally in 2012, the NFL eased the blackout rule allowing teams to set their own benchmark for ticket sales. Teams had to sell at least 85 percent of tickets for a home game and then the blackout would be lifted. The NFL allows teams to choose their own number between 85 and 100 percent.

Even if the FCC goes ahead and eliminates the rule, there is nothing that says the NFL and networks cannot include in their contracts deals that would include some sort of blackout rule. The league has stated that it will strongly oppose elimination of the blackout rule. The NFL believes the rule is good for ticket sales and for NFL stadiums.