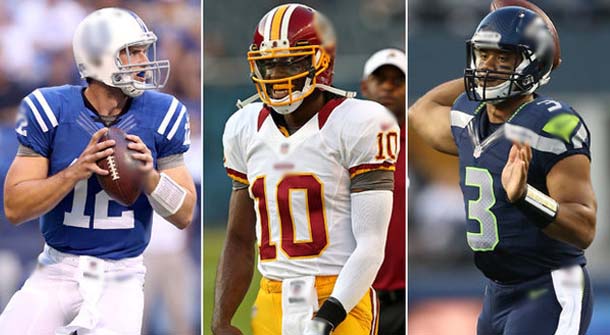 This year’s top rookie quarterback class has been fun to watch. Each rookie has shown potential in one way or another while several have at times proven to be a notch above the rest. When rating rookie quarterbacks, we must keep in mind that they are just that, “rookies.” Hence, a bad grade doesn’t necessarily mean the rookie QB has been horrible. As we know, many of their teams leave much to be desired. In other words, rookie quarterbacks can’t do it all no matter how much potential they possess. All that said, let’s take a look at how the current class rates to date.

1. Robert Griffin III, Team – Redskins (2-3)
2012-2013 Stats: 101.0 QB Rating, 1,161 Passing Yds, 241 Rushing Yds, 8 Total TDs, 1 INT, 5 Fumbles
Five weeks in Griffin has shown the most well-rounded game of all the rookie QuarterBacks. The stats definitely support this notion. If you’ve watched him, there’s no denying he has a good arm and very good speed. However, he has had trouble hanging on to the ball at times as his five fumbles lead this top rookie class. This past Sunday, Griffin suffered a concussion early on so he didn’t get a chance to attempt to lead the Redskins to a victory over the now 5-0 Atlanta Falcons. He vows to be back and he will be severely tested in the coming weeks as he faces the Minnesota Vikings, New York Giants, Pittsburgh Steelers, and Carolina Panthers before his team’s Bye week. He’s definitely the real deal but only time will show what he’s really made of.
Grade: B+

2. Andrew Luck, Team – Indianapolis Colts (2-2)
2012-2013 Stats: 77.1 QB Rating, 1,208 Passing Yds, 104 Rushing Yds, 8 Total TDs, 5 INT, 2 Fumbles
Like Griffin, Luck has also proven to have a good all-around game. To begin the season it didn’t appear that way, but he has shown gradual improvement in games three (Jacksonville) and four (Green Bay). In his last game, he demonstrated flashes of greatness as he led the Colts to a shocking upset victory over the Green Bay Packers 30-27. Luck threw for a career high 362 passing yards and was a key factor down the stretch. His next four games (New York Jets, Cleveland Browns, Tennessee Titans, Miami Dolphins) are against mediocre opposition. If Luck continues to mature at a steady pace, he could lead his team on a good stretch as they near the middle of the season.
Grade: B-

3. Ryan Tannehill, Team – Miami Dolphins (2-3)
2012-2013 Stats: 70.4 QB Rating, 1,269 Passing Yds, 12 Rushing Yds, 3 Total TDs, 6 INT, 2 Fumbles
Tannehill has at times shown an efficient passing game, but it hasn’t been consistent enough. This past Sunday against the Cincinnati Bengals, Miami limited his pass attempts and focused more on the running game. As a result, Tannehill had a decent game and led his team to a 17-13 victory. Perhaps that seemingly effective formula will be the plan for the rest of the season. The next five game stretch will be telling as he takes to the road in three of those games (New York Jets, Indianapolis Colts, Buffalo Bills).
Grade: C-

4. Russell Wilson, Team – Seattle Seahawks (3-2)
2012-2013 Stats: 75.3 QB Rating, 815 Passing Yds, 92 Rushing Yds, 5 Total TDs, 6 INT, 1 Fumble
The Seahawks have gotten off to a decent start at 3-2. However, one can’t help but feel it’s been more about their defense and other key player makers, and much less about Wilson. Wilson has yet to have a breakout game and he’s thrown for five interceptions in his last two games. While he has shown good speed, his arm has definitely not lived up to expectations. He and the Seahawks will be greatly tested in their next two games (New England & San Francisco). If Wilson doesn’t step it up a notch, his team’s season could flip in the other direction in a hurry.
Grade: D

5. Brandon Weeden, Team – Cleveland Browns (0-5)
2012-2013 Stats: 64.5 QB Rating, 1,288 Passing Yds, 33 Rushing Yds, 5 Total TDs, 9 INT, 2 Fumbles
Despite Cleveland’s 0-5 start, Weeden has shown some promise. His arm looks good when it’s connecting with his receivers, but that hasn’t always been the case this season. Weeden’s nine interceptions lead this top rookie class and he consistently continues to throw picks. If the Browns weren’t as bad as they are, Weeden may have a couple of NFL wins under his belt by now. However, the Browns are the Browns. Therefore, Weeden will have to continue to work with the cards he’s been dealt and hope it gets better before it gets much worse.
Grade: D