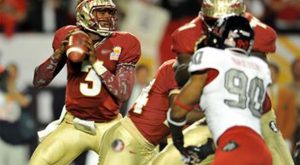 Northern Illinois quarterback Jordan Lynch couldn’t back up his pre-game bulletin-board-worthy chatter as the Huskies fell to Florida State, 31-10 in the 2013 Orange Bowl, as the Seminoles capped another 10-win season for head coach Jimbo Fisher.

Lynch, who was averaging 364 yards of total offense per game entering the contest, found it hard to get anything going against a superior FSU defense. In fact, the NIU junior was outplayed by Seminole senior QB E.J. Manuel, who became just the second player in college football history to lead his team to four consecutive bowl wins. Manuel finished 27-for-39 for 295 yards and a TD and, as in his other bowl victories, did not throw an interception.

Despite having 328 yards of total offense in the first 30 minutes of play, Fisher found his FSU squad ahead just 7-3 late into the first half. Manuel was finally able to lead the Seminoles on an 11-play drive that culminated with a six-yard touchdown pass to Rashad Greene with just eleven seconds remaining in the half.

Lynch managed just 24 yards on 12 carries in the first half as the Huskies, who entered the Orange Bowl averaging over 40 points per game, totaled an uncharacteristic 110 yards. There were several dropped passes by NIU receivers and Lynch had trouble with his accuracy at times. Lynch wound up 15-for-41 for 176 yards passing with one touchdown and one interception.

Trailing by two touchdowns in the third quarter, newly named NIU head coach Rod Carey and his troops got a much needed spark. Facing a third-and-fifteen from his own eight-yard line, Lynch found Akeem Daniels for a 55-yard gain and three plays later hit Martel Moore with an 11-yard TD pass to cut the Seminole lead to ten.

Carey, who got the job after Dave Doeren accepted the same position at N.C. State, then caught FSU napping and converted a surprise onside kick. Northern Illinois took over at their 47-yard line and proceeded to march to the Seminole 23 before Terrence Brooks stepped in front of a Lynch pass and returned it 20 yards to end the threat.

Florida State didn’t do much with the football until the fourth quarter when Manuel and fullback Lonnie Pryor each scored touchdowns to put the game away. Pryor, a 6-0, 229-pound senior, led all rushers gaining 134 yards on just five carries, two of which went for touchdowns.

FSU kicker Dustin Hopkins established the Football Bowl Subdivision career record for the most career field goals after hitting a 25-yarder in the third quarter to give the Seminoles a 17-3 lead.

Lynch finished the game with just 44 yards on the ground on 23 carries. He entered the game with 1,771 yards on 271 carries, a 6.5 per carry average and 19 touchdowns. The Orange Bowl was the first game all season where the Huskies failed to score a touchdown in the first half. Pryor’s 60-yard TD run in the fourth quarter was the longest running play allowed by the NIU defense all season. The previous long run was 28 yards.