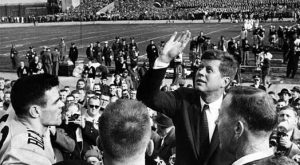 Those words were spoken by the man that we remember today - former President John Fitzgerald Kennedy - assassinated on this day 50 years ago in 1963.

President Kennedy was well known as an avid sportsman and one of his favorites was football. While at Harvard, he had been a member of the junior varsity squad, but a back injury forced him out of the sport. Still, Kennedy admired the men who battled on the gridiron and held his highest esteem for the men who suited up in the yearly Army-Navy football game.

Kennedy had served as a Navy PT boat commander before entering public office. After winning the 1960 election and upon entering the White House, the new president was in awe of Joe Bellino, the Navy halfback who won that year's Heisman Trophy as college football's best player. When Bellino hinted about meeting Kennedy, the newly elected president sent a limousine to pick up Bellino and some of his teammates for a get-together at the Kennedy home.

It was well documented that Kennedy loved the Army-Navy rivalry. As president, he attended both the 1961 and 1962 games and had plans to attend the game in '63. Ten days prior to the game, the president sent a telegram to then Navy head coach Wayne Hardin stating that he planned to be sitting on the winning side at the end of the game. JFK had planned to sit on the Army sideline during the first half of play and the Navy side in the second half.

That, of course, did not happen as the country mourned the death of its leader who had so skillfully avoided a nuclear war with the Soviet Union. His approval rating was at 70 percent when he and the First Lady, Jacqueline Kennedy, took that fateful ride in the motorcade through Dallas.

The 1963 edition of the Army-Navy game was to be played on Nov. 30, but was postponed. Many believed that game would not be played at all that year, but with the approval of the First Lady and the Kennedy family, the contest was scheduled for Pearl Harbor Day, Dec. 7. The game that the president loved so much would wind up being a great tribute and it would help lift the spirit of the country.

At that time, the NFL was not as popular as college football and no game was bigger than Army-Navy. Both programs were among the best in the country every year and 1963 was no different. The Naval Academy came into the game ranked No. 2 in the nation with a 8-1 record while Army was 7-2.

Navy boasted a young junior QB named Roger Staubach who claimed that season's Heisman Trophy. He was to appear on the cover of LIFE magazine's Nov. 29 issue, but history changed that.

Prior to kickoff at Municipal Stadium in Philadelphia, the crowd of 102,000 honored Kennedy with a moment of silence. The stadium, which would later be renamed JFK Stadium, was eerily silent until the ball was kicked off and play began.

Army QB Rollie Stichweh led Army down the field and scored the first touchdown of the game in the first quarter. Navy answered with fullback Pat Donnelly whose third touchdown gave the Midshipmen a 21-7 lead four minutes into the fourth quarter.

But Stichweh was on a mission. He led Army down the field, scored on a one-yard run and then added a two-point conversion to bring Army within six points, 21-15. Then, Stichweh recovered an onside kick and led the Cadets to the Navy two-yard line with less than 20 seconds remaining in the game.

On a fourth down play from the two-yard line, Stichweh turned to the officials for assistance with the deafening crowd. The officials ignored the Army QB and the clock ran out ending the comeback attempt.

Navy went on to lose to No. 1 Texas in the Cotton Bowl and Stichweh and Staubach became lifelong friends. After his Navy service, Staubach went on to win two Super Bowls as the quarterback of the Dallas Cowboys, who became America's team.

The 1963 Army-Navy football game is remembered for what it did for our country. On this day we reveal ourselves and remember one of our greatest.