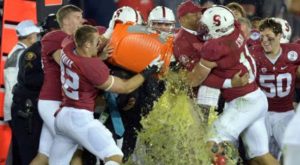 Head coach David Shaw’s Cardinal running game started quickly with early TD runs from Kelsey Young and Stepfan Taylor to jump out to a 14-0 first quarter lead. Just as it seemed the Badgers had no answer for Taylor and company, Wisconsin battled back. Ball, who finished with 100 yards on 24 carries, scored on an 11-yard run and, after a 10-play, 85-yard drive, Phillips hit Jordan Frederick for a four-yard TD with just 19 seconds remaining in the first half.

The second half was a defensive struggle as neither team managed a first down in a scoreless third quarter. Leading 17-14 late in the fourth quarter, Jordan Williamson nailed a 22-yard field goal to put the Cardinal up 20-14 with 4:23 remaining in the game.

The Badgers, coached by legendary Barry Alvarez who stepped in when Bret Bielema took the Arkansas head coaching job, put up a final valiant effort in an attempt to avoid losing its third straight Rose Bowl. Melvin Gordon gained eleven and five yards as Wisconsin edged closer to Cardinal territory. Phillips hit WR Kenzell Doe for a five-yard gain on first down to move onto Stanford’s end of the field, but Amanam came up with the interception on the game’s next play ending any chance for a late Badgers’ rally.

Kelsey Young started the scoring with a 16-yard run to cap an 80-yard game-opening drive by Stanford. Freshman QB Kevin Hogan kept the drive alive with a four-yard run on a third-and-three and Shaw went to the trick bag early as WR Drew Terrell hooked up with Jamal-Rashad Patterson on a 34-yard reverse pass to set up Young’s score.

Wisconsin lost the 2011 Rose Bowl to TCU, 21-19, the 2012 game to Oregon, 45-38, and now this year’s contest by six points. Alvarez, who had led the Badgers to three Rose Bowl wins during his tenure in Madison, couldn’t get the Wisconsin offense on track in the second half managing just 82 total yards. The Badgers were able to hold the dynamic Taylor under 100 yards-he finished with 88 on 20 carries and the one touchdown. It was the first Rose Bowl win for Stanford since the 1972 game when QB Don Bunce led the Cardinal to a 13-12 win over Michigan. It was Stanford’s sixth Rose Bowl victory trailing only USC and Washington among Pac-12 schools.