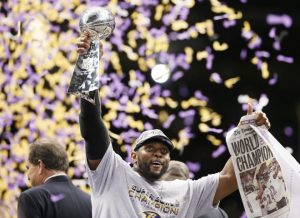 After jumping out to a 28-6 lead, the Baltimore Ravens held on to give the franchise its second Super Bowl victory and they sent future Hall of Fame linebacker Ray Lewis out as a winner with a 34-31 win over San Francisco.

Billed as the Battle of the Brothers, the Harbowl did not disappoint. Ravens’ QB Joe Flacco, the game’s Most Valuable Player, threw three first-half TD passes to give Baltimore a 21-6 halftime lead. Flacco hit WR Anquan Boldin with a 13-yard TD pass on the Ravens’ first possession and then threw a one-yarder to TE Dennis Pitta and a 56-yarder to WR Jacoby Jones in the second quarter to build the Ravens’ lead.

The 49ers, with one of the NFL’s best defenses, actually limited the Ravens to just 93 yards on the ground and really got going after a 34-minute power outage stopped the game in the third quarter. The stoppage was a huge benefit for the slumping 49ers.

It looked like a blowout was in order when Jones took the second-half kickoff 108 yards for the Ravens, tying an NFL record, for a TD which put Baltimore ahead, 28-6. But give San Francisco, head coach Jim Harbaugh, QB Colin Kaepernick, and the rest of the 49ers’ offense credit as they slowly battled back in the second half to pull within five points in the final minutes.

The 49ers erupted for 17 unanswered points after the power outage led by Kaepernick who threw a 31-yard TD pass to WR Michael Crabtree and then scored on a 15-yard run to cut the lead to two with 9:57 remaining in the game. Kaepernick finished 16-for-28 for 302 yards, the one touchdown, threw one interception, and was sacked three times.

Flacco, who has led Baltimore to the playoffs in each of his five NFL seasons, finished 22-for-33 for 287 and the three TD passes. The Ravens’ QB threw 11 touchdowns in the postseason and did not throw a single interception. With the Super Bowl MVP added to his resume and his contract up for renegotiation, the former University of Delaware star could be in for a huge payday.

The 49ers’ rally continued late into the fourth quarter as Kaepernick led the SF offense inside the Baltimore ten-yard line. But, it seemed prophetic that Lewis, in his final game, and the Ravens’ defense would come up with the big stop on fourth-and-goal to ice the game.

San Francisco forced a Baltimore punt on the possession but with just four seconds left, Ravens’ punter Sam Koch conceded a safety to the Niners and, on the ensuing free kick, return man Ted Ginn was tackled near midfield as time ran out.

It was the second Super Bowl win in as many tries for the Ravens. Boldin wound up with six receptions for 104 yards. Baltimore had lost four of its last five regular season games before sweeping the postseason. Flacco has won at least one playoff game in each of his five years. He is now 9-4 in postseason play.