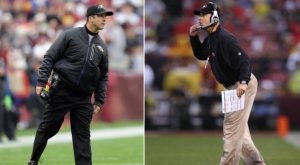 It’s a true football family in the Harbaugh household. Father Jack was a well-respected long-time college football coach and brothers, Jim and John, face off against each other in Super Bowl XLVII, and even sister Joani got in on the action albeit as the wife of a basketball coach. She is married to Indiana head coach Tom Crean.

John and Jim are the first brothers to ever be head coaches in the National Football League and Sunday they square off against each other in another league first–the first Super Bowl where the two opponents are coached by, you guessed it, brothers.

The brothers Harbaugh were born in Perrysburg, Ohio, while Jack was the head football coach at Perrysburg High. After several moves, the elder Harbaugh wound up as an assistant for the legendary Bo Schembechler at the University of Michigan. Both John and Jim would star at Pioneer High School in Ann Arbor. John graduated from Pioneer and went on to play college football at Miami (OH). When Jack became the defensive coordinator at Stanford in 1980, Jim transferred to Palo Alto HS, from which he graduated. The younger Harbaugh would return to Michigan where he would earn four letters and set numerous Wolverine passing records. As a senior, he was the Big Ten Player of the Year and finished third in the Heisman Trophy race.

While Jim was playing in the NFL, John began his coaching career in 1984 as an assistant at Western Michigan, where dad was the head football coach. After 14 years in the college ranks, John got his break when Andy Reid hired him to become the Philadelphia Eagles’ special teams coordinator. Ten years with the Eagles provided the requisite experience and in 2008, the Baltimore Ravens tabbed the older brother to be their head coach.

In his five years as the Ravens’ boss, John owns an overall record of 54-26 and has won at least 10 games in each of his seasons but one, 2009. Harbaugh has taken his teams to the playoffs in each of his five seasons including three AFC title games. He finally won one this year and is looking to win the organization’s second Lombardi Trophy. That is, if he can find a way to beat his younger brother.

Jim, who had a somewhat better playing career, wound up playing 14 seasons in the NFL most notably with the Chicago Bears, the team that drafted him in the first round of the 1987 draft, and the Indianapolis Colts with whom Harbaugh won the NFL’s Comeback Player of the Year award in 1995.

While John already had 10 years of coaching under his belt, Jim entered the profession in a rather unique way. In 1994 while still playing in the NFL, Jim worked as an unpaid assistant for his father, who at the time was the head football coach at Western Kentucky. WKU was, at the time, a member of the NCAA Division I-AA and Jim was responsible for recruiting players from Florida, Indiana, and Illinois while also serving as an offensive consultant. Some of the younger Harbaugh’s efforts paid off as WKU won the I-AA national championship in 2002.

After Jim left the NFL in 2001, he became the quarterbacks coach of the Oakland Raiders and served in that capacity in 2002 and 2003. Prior to the start of the 2004 season, Jim was named the head football coach at the University of San Diego. After a 7-4 initial season, Harbaugh led USD to consecutive 11-1 seasons and Pioneer League championships.

Jim then replaced Walt Harris in 2007 as the head coach at Stanford where, after 4-8 and 5-7 seasons in 2007 and 2008, Harbaugh built the program into a national contender. With QB Andrew Luck in 2010, the Cardinal went 12-1 and won the Orange Bowl. Four days after that win, young Harbaugh got the job he currently holds in San Francisco and he has yet to disappoint 49ers’ fans. He has 24 wins, has been to two NFC title games, and is looking to earn the franchise’s sixth Super Bowl victory, a win that would tie the Pittsburgh Steelers for the most wins in Super Bowl history.

Regardless of who wins on Sunday, the Lombardi Trophy will add to a vast list of achievements by the Harbaugh family. National championships, bowl wins, coach of the year awards…deep down brothers do not want to lose to one another especially in a game of this magnitude. But, when it’s all said and done, the true football family will enjoy the Super Bowl victory…no matter who wins.