Tiger Woods Will Miss Final Round At Torrey Pines 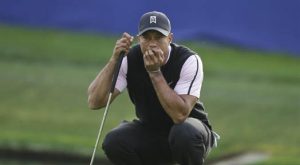 Tiger Woods has owned the course at Torrey Pines in San Diego, but not this time. Woods failed to make the cut to advance to the final round at the Farmers Insurance Open after a disastrous seven-over-par 79 on Saturday.

The No. 1-ranked player in the world, Woods failed to make the cut in his first match of the season. A year ago, he won this event for the seventh time. Woods has dominated the Farmers Open and if you count the 2008 U.S. Open championship he won at Torrey Pines, he has nine victories on the course. Throw in a U.S. Junior Championship and it makes ten.

It was not meant to be this time around as Woods struggled with his first two rounds. He shot 72-71 to make the initial cut, but started the third round with a 42 on the front nine on his way to 79. In that third round, Woods had a seven-hole stretch where he had two double-bogeys and five consecutive bogeys.

Saturday’s performance was Woods worst since a 79 in the third round at last year’s Memorial. His worst performance ever was the 81 he shot at Muirfield in horrendous weather at the British Open.

Because so many players had made the initial cut, a secondary cut was necessary to pare the field down to 70. The PGA instituted the rule in 2008 to keep fields in final rounds at approximately 70. Woods finished tied for 78th.

It will be the first time in his career that Woods does not play the final round at the Farmers Open. He won the event last year by four strokes. Woods’ playing partner, 20-year-old Jordan Spieth, played beautifully and was tied for second place going into the final round. Woods will try and gain back his form next week when he plays in the Omega Dubai Desert Classic in the United Arab Emirates.