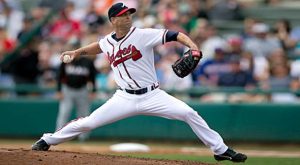 Atlanta pitcher Tim Hudson etched his name in the record books notching his 200th career victory in an 8-1 win over Washington on Tuesday.

Hudson (3-1) struck out six, walked two and gave up just three hits, one an infield single, over the seven innings he pitched. He also had a big game at the plate hitting the third home run of his career to go along with a double to finish the game 2-for-3.

It was a true baseball rarity for Hudson who became only the second pitcher in the history of the game to hit a home run while winning his 200th game. Cleveland Hall of Fame pitcher Bob Lemon is the only other major leaguer to pull of the task doing so back in 1956.

The Braves moved to 17-9 on the season, firmly in first place of the National League East and 4.5 games ahead of the Nationals. Andrelton Simmons had three hits for Atlanta, including a lead-off first inning home run to start the onslaught.

Atlanta went up 4-0 after two innings and with Hudson’s pitching, cruised to their eighth consecutive win over Washington dating back to last season.

Hudson is the third active major league pitcher to record 200 wins. The New York Yankees’ Andy Pettitte has 248 careers wins and Roy Halladay of the Philadelphia Phillies has 201.

The 37-year-old Hudson was working a no-hitter through the first four innings. Washington’s Tyler Moore doubled to lead off the fifth inning to ruin it. Anthony Varvaro pitched a perfect final two innings to record the save.