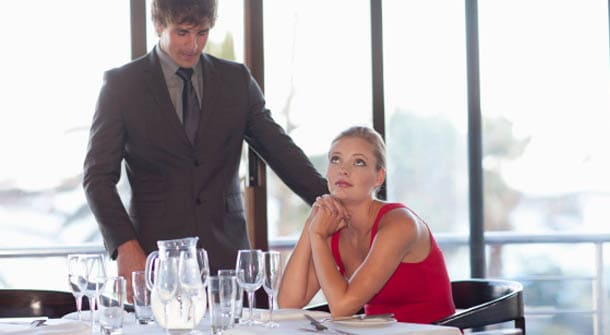 Let’s face it we’ve all had to deal with an angry woman at least once in our adult lives and chances are its really more like several times a week. From the fight with your girlfriend about having dinner with her friends to the knockdown drag out fight about whether you’re pulling you weight in the house, an angry woman is never an easy thing to deal with. Luckily, there are some things that you can do to help calm her down and make your life a little bit easier.

How to calm down an angry woman

Don’t Get Angry Yourself

If you’ve got your ladylove fuming in front of you it can be tempting to let your temper fly just like her, but this only adds fuel to the fire and gets her more pissed off with you. Even if you feel like you are justifiable in getting mad just like her, she will just see it as you getting mad for no reason. It’s a screwy concept, but you getting mad will only make things worse, so keep your temper in check and find ways to bring her temper down. Think of it like a hot pot on the stove, let it cool down before you touch it.

Actually Listen to Her

A great deal of the time when women get mad it is because they feel as if men aren’t listen to them. By listening to her, absorbing the words and parroting them back to her in a different way you can not only hear what she is saying, but show her you are as well. Doing so can also help both of you to be able to identify parts of the conversation or fight that you don’t see eye to eye on and try to resolve them in a way as to appease both of you.

Every man knows the magic words when it comes to women and fights… “I’m Sorry”, “You’re Right” and “I Agree with You”. One of the surest ways to calm down an angry woman is by telling her these magic words. You don’t have to cave with the entire fight, but find some point in her argument that you agree on or feel you’ve been wrong about. From the testy attitude you had when she told you what you did wrong to the overspending that you did on that hand drill that’s sitting in the garage still in its packaging, find some area of the fight that you can disarm her with by agreeing with her.

OK, it might seem strange, but by taking a walk with her and giving each of you a little purpose during the fight you can change things up for the better. By simply taking a stroll around the block or through the neighborhood park both of you will be able to get a little fresh air, some perspective and put both of you in a situation where you need to conduct yourselves in a bit more of an appropriate way in public. It will get you heart pumping, your blood flowing and your oxygen circulating… all of which can help both of you see resolutions to the fight that you may not have seen before.

One way to calm her down is by simply making eye contact with her. When a person is mad it is difficult to make eye contact and keep it, you emotions are swirling and looking in someone’s eyes puts a damper on that anger. Use this against her in your favor, by keeping eye contact with her and forcing her to calm down and have a more reasonable discussion with you. It won’t resolve everything, but it can help both of you get to a place where you can calmly talk about the root problem of the fight.