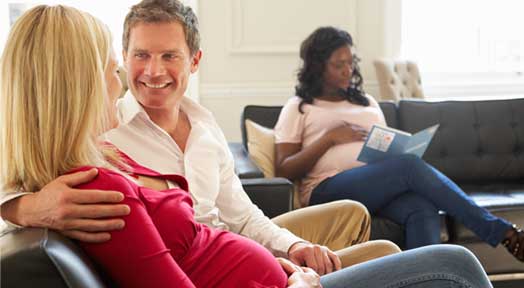 When you hear about 80-year-old billionaires impregnating their 20-year-old trophy wives, you start to believe that male fertility has nothing to do with age. But in recent years, a number of studies have been challenging that very notion.

The truth, it seems, is that just like women, male fertility decreases steadily over time. Not necessarily at the same rate, or starting from the same age, but the decline definitely exists. For most men, the rapid decent starts at the age of 35, when sperm count takes an initial plunge from its peak in the 20s. After that, the decline is gradual, making noticeable dips decade by decade. So while those 80-year-old moguls aren’t as virile as they once were, they’ve still got some gas left in the tank. It helps that they’re bedding a woman in the peak of her own fertility.

What’s even more interesting according to the studies is the quality of sperm as men age. Even with a high sperm count, older sperm can have weak or incomplete genetic information, leading to health and developmental problems in fetuses. Autism, schizophrenia, cancer, Down syndrome… the risks all increase along with the age of the father. And the shift in prevalence in this kinds of disorders occurs as early as age 40 in some men. In other words, it happens faster than you’d expect.

Lower sperm quality less likely for men over 40 to conceive.

Along with lower-quality sperm as men age, there is also evidence that actual sperm count declines with age as well. This can mean either fewer sperm per sample or fewer live or motile (moving) sperm per sample. Since only motile sperm can make the journey to meet an ovum, they’re the only ones that count. The fewer viable sperm there are, the less likely the chances are a couple will conceive.

Really want kids in the future try freezing your sperm before you get to age 40s plus.

So what’s a guy to do if he’s in his 20s or 30s, doesn’t want kids now but certainly wants to protect his chances of having a family in the future? Some researchers suggest freezing today’s samples for future use, just in case future fertility turns out to be the result of something on the male side of the equation. The up-side of making a deposit for the future is that the sample will be screened at the time it is given, so if there are any early problems, you’ll know about it now rather than later. At the same time, there’s no guarantee you’ll have to use your back-up plan, but it’s good to know it’s there.