Athletic Kinesio Tape what is it and does it work? 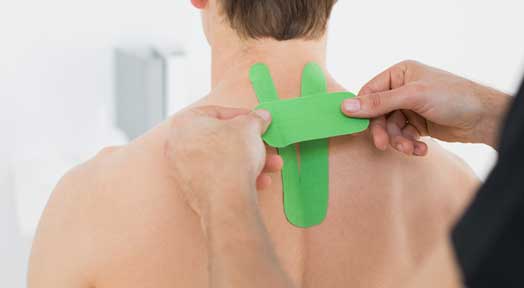 What Is Athletic Kinesio Tape? You may have seen athletes with random stripes of bright colored tape on the sidelines of several sporting events and thought to yourself, ‘what is that all about?’ You are not alone. One of the most common questions during and after the games other than medal counts was in regards to Athletic Kinesio Tape, the newest rage for the modern athlete. So what is this stuff? Does it work to treat or prevent sports injury or is it just a lot of hype?

What is Athletic Kinesio Tape?

Believe it or not, Kinesio Tex tape did not just pop up recently. It was actually created over 3 decades ago by a Dr. Kenzo Kase, a chiropractor of Japanese descent. Dr. Kase felt that Athletic Kinesio tape worked as a substitute for massage or other forms of manual therapy and that it could work to lower pain levels and to reduce soreness for patients who had been previously injured.

Sumo wrestlers were the first to use this tape. Back in 2008 during the Beijing Olympics this tape gained global notoriety because 58 countries received a donation of a roll of the tape to try.

Today, many popular and well-known athletes such as Serena Williams and Lance Armstrong have used various brands of Athletic Kineseo tape. There are many different brands to choose between today and many medical professionals recommend them for their clients and use them.

Some runners enjoy the capabilities of Kinesio tape to stabilize kneecaps that have been dislocated or strained. Kinesio tape adds stability, but it is still able to stretch and to contract back so that movements that may hurt the knee are limited and normal movements of the knee are not restricted. This means that runners who have knee injuries are oftentimes able to use Athletic Kinesio tape so that they can continue to train even as they recover from their injury.

Dr. Kase has explained various concepts behind the Kinesio tape by stating that much the muscular and joint pain people feel emanates from a thin skin layer that is situated under the epidermis and that the tape was designed to lift that layer of skin. Dr. Kase claims that the Kinesio tape is able to open up a space between the epidermis where the pain is coming from and promoted healthy circulation. He states that the tape also provides a cooling effect that prevents the pain.

Some doctors and scientists are still pretty skeptical about Kinesio tape, but athletes continue to praise it and use it, as is clear from the prevalence of Kinesio tape at sporting events worldwide. If you are currently seeing a chiropractor or being treated for an athletic injury, consider asking your medical professional if Athletic Kinesio Tape may be a good choice for your specific needs.