The Most Common Bench Press Mistakes 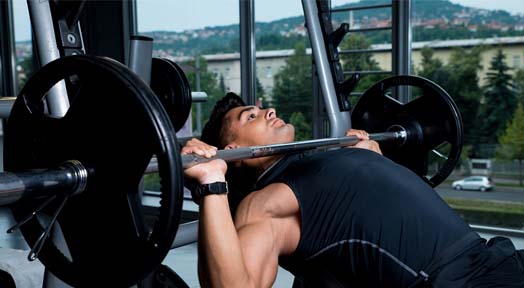 By taking a quick look at the bench press exercise, one can surely think “how can unpacking a bar, lower it to my chest and raising it ever be difficult?” Well surprising as it may sound a vast majority of individuals have often been observed performing this exercise incorrectly by failing to recognize the exercise for what it actually is: an easy lift. We will be discussing some of the more common mistakes made when performing the bench press lift and how you can avoid bench press exercise mistake.

Let’s first look at the setup. Have you ever seen some powerlifters using the same weights over and over, unable to increase the load for a challenging experience? Well the answer to this is the result of an improper setup not allowing a decrease in the range of motion when increasing the weights. Let’s look at it another way, the shorter the distance travelled during the press equals the more you can lift. Makes sense doesn’t it. When performing the bench press any professional powerlifter will tell you that if you want to decrease the range of motion to allow you to lift heavier weights you need to simply widen your grip on the bar.

Now while this is strongly suggested it is also recommended not to use too wide of a grip on the bar as this has often been found to result in severe shoulder damage. Once you have found a comfortable grip on the bar you can now begin to learn how you should retract your shoulder blades when performing the lift. Pulling your shoulders backwards reduces the range the barbell has to move, and although the exercise requires keeping your head, shoulders, and buttocks to be in firm contact with the bench, by slightly arching your lower back you can also shorten the range of motion during the lowering of the barbell.

Beginners when performing the bench press exercise have customarily understood the basics of the exercise as targeting the pectoral and triceps muscles. While this is 100% true it is not the full-bodied nature of the exercise. Preparing the body by becoming completely rigid is vital before you even think of unpacking that bar. How does one actually become rigid whole laying on the bench? The answer is actually quite simple. It’s all in the footwork. The more you move your legs during the lift, the less loads you’ll be able to lift. By properly positioning your feet you can effect what is often termed by professional powerlifters as an effective “leg drive” allowing you to perform an extra rep or adding a couple of extra pounds to the bar during the exercise. Finding the best position however is up to you. Just explore until you find a solution that best works for you.

If you want to exercise a large bench press one mistake you should avoid making is not gripping the bar firmly enough. That’s right, hold and squeeze that sucker tight before you unrack it. Scientifically speaking, whenever you squeeze an object firmly you immediately activate the muscles within your hands, triceps and forearms bolstering your strength by contracting the muscles within your entire body.

Most men today have often been seen in the gym among their peers competing with each other to see who can bounce the bar off their chest the most distance. The principle behind this ridiculous act is that by lowering the bar as quick as possible a person can bounce it off the chest to gain the necessary momentum to perform the next rep.

However the sad and sobering truth to this rubbish is, lowering the bar quickly and bouncing it off the chest does absolutely nothing at all for the exercise. The principle to the bench press is not to violently drop the bar, but rather lower it in a restrictive effort. Allowing the bar to bounce rapidly off the chest does not permit the lifter to have any control whatsoever of the barbell and can only lead to severely injuring oneself upon impacting the chest. The proper technique when performing the bench press is to lower the bar at a controlled speed and without touching your chest lift it quickly by pressing it back up.