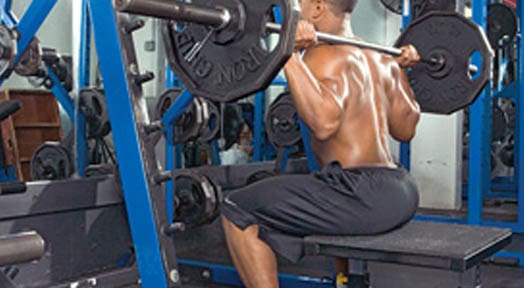 In order to maintain the flexibility of having a strong physique one needs to develop fairly large muscular legs to sustain upper body strength and muscle mass. One of the key exercises used by many of the fitness experts today is known as the box squat workout. Many professional powerlifters and advanced fitness enthusiasts when performing box squats exercise routine have become accustomed to adding weights to this routine of between 100 to 400 pounds.

What is a Box Squats Workout

The box squat is a variation of the typical squat performed with the use of a box, bench or any other similar object placed beneath the exerciser thus preventing the individual from descending at too low a level towards the floor. Successfully performing box squats allows the lifter to gain access to a wide range of benefits including the targeting additional muscle groups resulting from pausing while squatting on the box and returning to the starting position.

Benefits of a box squat workout

During the box squat workout routine the individual can effectively position themselves to sit at a greater distance backwards. In addition by adjusting the height of the box user can determine the height of descent. This motion when using the box has been proven effective in successfully training the gluteus and hamstrings to increase muscular development. These muscular regions typically used to perform the workout as the box used becomes a perfect tool used to demonstrate the proper technique when squatting. This is highly important as heavier squatting requires a more precise form of the technique used during the workout.

How to do box squats

During the box squat workout, gradually descend until you can just barely touch the box beneath. Holding this position for one count drive the bar upward as quickly as humanly possible. Some professionals have suggested that while performing the box squat that all their body weight be applied to the box however this general practice is never recommended as it carries with it the increased potential to displace the tailbone located within the pelvic region of he body often resulting in severe lower back pains and compression of a spinal root nerve in the back, a condition which has been referred to by medical professionals as sciatica. To successfully perform the box workout you will need:

A padded box of about eighteen inches on it's longest side and about thirteen inches on the shorter sides. Using a box of this dimension will allow you to practice this routine at the general height required for beginners before using a lower height such as observed with boxes containing a height of thirteen inches.

To perform the box squat training workout it is recommended to start training with heavy weights just under your max. Firstly beginning with three increments of no more than eighteen inches, then fifteen followed by thirteen inches. After successfully completing this routine at all three levels the intensity is typically increased by further including an additional twenty pounds to repeat the cycle.

By incorporating a variety of stances during the exercise, the box squat routine targets several muscle groups such as the hamstrings, gluteus and the quadriceps to build their muscular mass and improve performance.

By positioning the bar on the lower back will ensure the maximum surface to area contact possible with the bar keeping the the body's centre of gravity at it's lowest during the exercise.

Many professionals have found that by keeping their lower back arched it has proven to be an effective measure in preventing lower back injury while building the lower abdominal muscles.

It is always strongly recommended that individuals performing the box squat have a spotter present to carefully observe the descent during the exercise. This cannot be stressed enough as your spotter will be able to determine the distance from the box used enduring you do not subject yourself to any common injuries associated with this exercise.