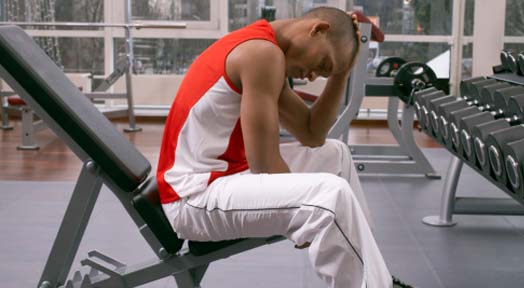 Most fitness enthusiasts and body builders take their exercise workouts quite serious occasionally placing unknowingly unhealthful demands of their bodies to the point of overtraining by committing themselves to a total session period exceeding the recommended 5 hour per week training. Individuals who have surpassed this suggested boundary and have found the workout to be fore more of an addiction are often recommended to seek the assistance of a professional and experienced trainer who will be able to guide them in getting on a positive track to a physically healthy workout.

Monitoring your heart rate is one way in determining if you are overtraining your body. Many individuals have occasionally been seen wearing heart monitors during their workout at the local gym. Notable changes in the resting heart rate of 60 to 100 beats per minute indicates an increase in the required metabolic rate which is necessary to compensate for the rigors associated with the training workout. However while useful it is not entirely necessary to purchase one of these devices to actively monitor your heart rate. Many professional trainers have found that by monitoring your heart rate in the mornings before getting out of bed is a sure way to determine any instance of overtraining during the workout by observing the current heart rate relative to the resting heart rate.

During the training workout if the body goes into a catabolic state the exerciser will experience an constant and recurring unquenchable thirst regardless of the amount of liquid consumed. This state commonly leads to a dehydrated body which is a strong indiction that the individual is being overtrained and can only be countered by a sufficient intake of water with an adequate amount of rest.

Experiencing the traditionally sore muscle tissues ofter a hard day's training workout is quite normal and much expected. However if this pain and sensation continues for an extended period in excess of 72 hours it is strongly recommended that a break from the training be effected to allow the muscles to actively recover. Training consistently without noticing any periods of rest inadvertently leads to overtraining of the muscles which will undoubtably impact muscle recovery and growth in a negative way. As such many professional bodybuilders and weight trainers have found that between 45 to 75 minutes is more than enough time for their strength and bodybuilding workout.

People who train their bodies excessively often view their training as something more than the activity for which it was originally intended and more of a conquest, or challenge having the firm belief that, the more they train , the better they'll become and the more refined they will look. This belief is sadly misguided as the body grows while resting and not during the training sessions. As such when strength training and body building it is suggested that to avoid overtraining a person should identify the motives behind their training workout, set short term and realistic goals draft a viable plan and follow it through.

Recurring injuries or finding yourself prone to injury during your training is often a sign that you are in fact overtraining your body. Many professional body builders have learnt that when the body is overtrained the time allotted to effectively rest between exercise sets is almost non existent and as a result places the body in a much weakened state during the training routine increasing the possibility of injury. Thus it is imperative that specific rest periods be scheduled between training routines and days in addition to have low intensity training workout days recognizing the use of lighter weights and fewer reps to allow the body sufficient time for active recuperation and muscle growth.