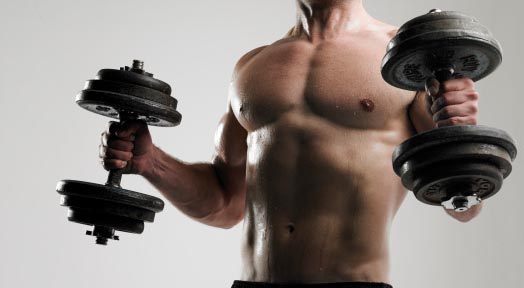 The question of high intensity interval workout vs. high volume strength training has been a recurring topic for debate between fitness professionals within the industry for a number of years. There has been the age old belief that, the heavier the weights lifted, the more muscle mass a person will gain. However, as time goes on and different weight training methods have proved varying results the verdict is still out.

This belief spawned a series of scientific research which provided details revealing the body’s hormonal response to high frequency, volume training consisting of very short rest periods. Many fitness professionals in light of this research concluded that it was this hormonal response was the deciding factor responsible for the body’s muscle growth and strength building.

Exercise Physiologists later uncovered results showing that the acute hormonal response of the body was in fact the body’s natural reaction to exercise stress, quite similar to the release of testosterone when exposed to a high level of caffeine. This in effect resulted in fat to be released within the bloodstream to be used by the body as fuel to enhance performance levels during an exercise workout. A similar concept can be observed in the instance of the body’s exposure to stress, and the release of adrenaline.

This release of fat is essential for the body to function effectively as persons who are not prone to a routine exercise workout are often subject to increasingly high triglyceride levels resulting in blocked blood vessels and atherosclerosis.

Fitness professionals who have been known to base their workout on effective powerlifting are of the firm belief of sacrificing the use of weights in order to achieve a high frequency workout is the most effective means of exercising. Many fitness enthusiasts and professional bodybuilders however have often been seen during their training routines to strike a suitable balance between the two types of training during their workout.

Seen more widely used by bodybuilders and fitness professionals, high volume, low intensity training has been historically used and more acceptable in the fitness industry. The general concept of this training is to successfully incorporate a series of multiple sets of exercises repeatedly targeting a specific muscle group in training. This is done in order to breakdown the existing muscular tissue thus increasing the tension time to enhance growth.

Irrespective of the research indicating the use of high volume, low intensity training as a suitable means of muscle growth there have been some unfavorable occurrences which give a strong indication that this method of training has certain limitations when used by itself. It was discovered that this training method was effective in the synthesis of protein in the body which is known as the rate at which the body is seen to repair the previously damages muscle tissue after the exercise workout.

This however does not in effect mean that the body is effectively building muscular mass. This due to the fact that volume training has the strong potential when used regularly to damage the body’s muscle tissue which can inadvertently lead to limitations in muscle growth and strength. By using a high volume workout on a constant basis will result in overtraining without actually recognizing the symptoms limiting muscular growth.

High intensity interval workout on the other hand is based on the theory that by incurring muscle damage in fewer instances will allow the muscle tissues more time to actively repair themselves to promote increased muscular mass and growth. The key to this training workout is to effectively utilize the available time during the workout to allow more time for muscle recovery which equates to increased growth.

Each training routine has its benefits to strength training and as an effective workout. however one of the more adaptable training methods to yield the best results used by many of the professional today has been by using a high volume training workout as a base routine and combining it with a high load volume workout as a supportive measure to allow the muscle tissue time to rest thus increasing progressive muscular growth and increase in core strength.