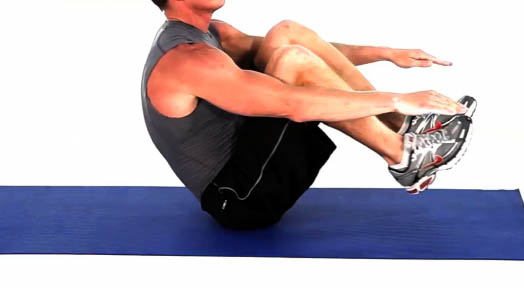 Men who are hard gainers will often find that although they exercise regularly they are still unable to reduce their excess stomach fat even though they practice the v sit up exercise workout. This difficulty in fat loss around these areas are primarily due to the fact that fat existing around the stomach areas is much harder to shed than the normal layers of fatty tissue generally found underneath the skin. This has resulted in a number of professional trainers utilizing a combination of a healthy diet and exercise in their training efforts to effectively get rid of that unwanted belly fat.

The V-Sit Up Workout to shred those abs

One of the recognizable workout routines performed by most men in their efforts to reduce their belly fat and tone those abdominal muscles involves the traditional training workout recognizing the proper amount of sit-up reps to create an anaerobic response within the body. Typically a low frequency exercise routine designed to elevate the heart rate is often enough to increase the cardiovascular function of the individual to promote an increase in calorie burn and fat loss. The key to exercise programs such as these is the knowledge of which sit-ups to perform during the workout.

How to do a V Sit-Up

The traditional version of the V Sit-up widely used by many professional trainers is an exercise easily performed by the average fitness enthusiast of an intermediate level to develop their core strength and stimulate fat loss.

During this position the upper body should be at an angle of about forty-five degrees from the floor, arms fully extended towards both feet in the V form. This exercise should be completed in exercise sets consisting of ten to fifteen reps. Men who have found the exercise no longer physically challenging will often elevate their upper body into a full V position for a more formidable exercise.

Another variation of the V Sit-up exercise can be performed by the average individual during office hours at work.