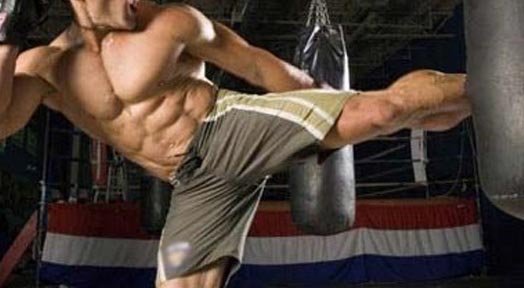 Training recognizing the use of mixed martial arts is increasingly becoming a popular novelty widely used in the fitness industry today by a vast amount of beginners and professional athletes doing MMA training workouts routine in their everyday training. Recognizable MMA fighter such as world renowned Anderson Silva, Georges St-Pierre, and Chuck Liddell  are known for their lean, mean well-toned body physiques allowing them to compete at extraordinary levels not to mention their bodies displayed on the covers of several fitness magazines and posters.

What is takes to have the body of a MMA Fighter

The average gym-goer today with hard work and dedication can get their bodies in shape. With extra dedication they can create a similar definitive look muscular tone and strength. Training to achieve the body of an MMA fighter not only requires the individual to master the respective techniques of the various exercises. You also must maintain the agility and endurance to pull through excruciating levels of intense training occasionally including five minute rounds. One of the necessary requirements for the individual training to become an effective MMA fighter is for that person to have a brawny anaerobic and aerobic structure. This is in addition to a proper workout aimed in developing a vast amount of natural physical qualities.

In MMA fighting flexibility, strength and enhanced speed in addition to the development of a better physique are all vital elements necessary in determining the success of one fighter over the other when in the cage. Training including exercises demanding a range of movements to be performed on multiple planes often simulating activities such as kicking, punching, striking, and jumping which have been adequately utilized to improve speed and coordination within the athlete to enhance their overall performance. One of the basic principle often suggested as a critical ingredient is to include movements like the push, pull twist, rotate, lift and squat.

While there are some individuals who will swear to the popularly used training method recognizing the use of steady-state aerobic exercises to be an effective means of training, most professional MMA fighters will suggest that such training bears no known relevance in the world of MMA fighting as they has been proven as ineffective in developing strength and endurance in the individual.

Rather a workout involving high-intensity interval training has been a successful training method on several occasions to vastly improve the overall speed, raw power and endurance in addition to increasing the duration and amount of excess post-exercise oxygen consumption and as such is recognized as one of the best ways to train as an MMA fighter.

Individuals training utilizing a similar method as MMA fighters have customarily included high-intensity interval training to effect a prolonged elevation of their metabolism to maintain higher rate of calorie burn over a longer duration of time after completing the MMA workout routine.

When training in intervals individuals are generally recommended to perform short exercise sets of high-frequency anaerobic exercises such as fighting rounds, sprints or weightlifting followed by a notably longer period of aerobic rest.

Flexibility of the MMA fighter allows the person to execute a series of high kicks and strikes is achieved by the individual possessing springy hamstrings often requiring a number of highly mobile hip movements to perform the necessary moves to strike or escape from the grip of their opponent.

Individuals when training like an MMA fighter must adopt a similar training principle to improve their flexibility by performing a number of stretches to increase the length of the muscle tissues to increase their power output, mobility and muscle recovery. Stretching before and after each workout is a vital ingredient in achieving any fitness goals whether the individual is training for MMA or not.

Finally as with any training workout, fitness program, body or power lifting, the person training must be able to perform the activity at a high intensity to complete the required exercise sets or rounds in the case of an MMA fight.

As such maintaining a proper diet is a key factor to achieving any fitness goal by ensuring that any foods which could negatively impact their physical ability is exempted from their diet. Foods which are considered wholesome and clean are best recommended to guarantee the best results of the MMA workout routine resulting in a healthier individual looking and feeling better.