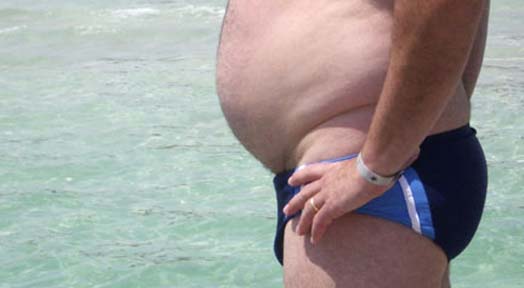 When it comes to styling sometimes men can get hit and misses on the clothing items they wear. From the atrocious fanny pack to the trendy scarf, which looks are hot and which ones are not? We’ve put together five clothing items men should never wear that every man should known about to avoid the pitfalls of a fashion flop.

This look is all too often seen in men who have a more rural life, those who are out and about on the weekend or on a holiday. It’s a tragic and forever unsexy look that women absolutely hate and that other men will publically mock, so it’s best to avoid it altogether.

Simply put, unless you have a fantastic body with defined muscle, very little fat and an attractive “package” this is never the right choice for you. Leave this look to men who work out constantly and have the abs to pull it off, like professional athletes.

This look was very popular in the 70’s and 80’s, and to be honest it didn’t look that great even back then. Nowadays, this is a ghastly look that nobody loves except Richard Simmons. Who wants to see your pale, pasty white legs? So steer clear from this one guys.

Though this look is thankfully less common than in years past, some men today still cling to the “trendy” clothing item that was popular in decades past. It’s unattractive and let’s face it most of the time fanny packs make the average man’s stomach look either painfully short or overly large, which is never a good thing.

You want to know a way to lose your “cool points” quick? Wear a dickie. This clothing item is about as unsexy as it can get and most women find it distinctly unappealing on a guy. If you feel the need to have a turtleneck look under a sweater or shirt (which is another fashion mistake you should completely avoid) go with the real thing instead of a mock turtleneck dickie that confuses everyone who sees it.