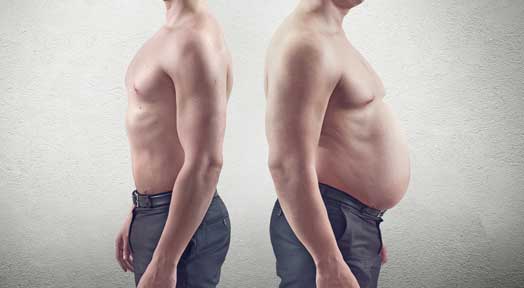 Pick up any magazine at the newsstand and “exercises for a flat belly” or some other catchy byline will jump out from the cover, it seems that still in this modern technology era we are still after the quick fix. It’s time to separate the myths from the facts and tell the details of the bad habits that could be causing your belly fat.

Do you know what is causing your belly fat?

Falling for the hype

There is no quick fix, no magic belly fat trimming exercise, or pill that shrinks belly fat. If there was everyone would have flat stomachs or six-packs. It’s a sad truth that our bodies are genetically programmed to gain and conversely lose fat from specific places. As a general rule for women it’s hips and thighs and for men the belly. To make this a double punch this is typically the first place fat piles on, and the last most stubborn place it leaves.

Focusing on the scale

While numbers don’t lie they certainly don’t tell the whole story when it comes to fat. The problem is people get obsessed with the number on the scale which actually has very little to do with the amount of body fat a person has. If you truly want to play the numbers game find out your body fat percentage, rather than relying on the scale as a measure of your body fat. Weight and fat were not created equal. Most athletes with flat stomachs weigh more than your average person because they have a higher muscle mass, and lower body fat percentage.

Simply getting up and moving is going to help, but skipping resistance training is a huge mistake if you’re trying to burn belly fat. A study from the University of Alabama showed that strength training made significant reduction in belly fat over a 16 week program. The same study also showed that though the belly fat reduced, the participant’s weight remained the same, more proof to throw out the scales and lift some iron.

One of the biggest mistakes people make is drastically cutting calories. Reducing the calorie intake might sound logical but if you remove the fuel, your metabolism will wither and burn out. That means less calories burned at rest, less calories burned when exercising and even while sleeping. If weight loss is the goal, an ideal cut in calories is 300-500 calories a day, remembering that the loss can come from eating less or moving more. When it comes to weight loss, slow and steady truly does win the race.