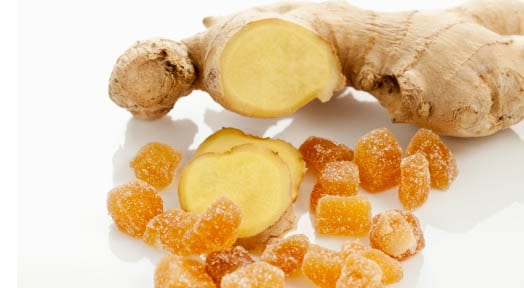 If there's one spice you should always have in your kitchen, it's ginger. It's a root spice that been used to flavor beverages and food, especially in Asian cuisine. It can be eaten pickled, just like with sushi, raw when it's blended in smoothies or juiced or cooked with certain meats and deserts. It's also used to make tea, ginger ale, wine and even spicy beer. It's been used for centuries by the Chinese for a variety of health ailments and is still just as effective today as it was then. Let's take a look at some of the wonderful health benefits of ginger.

Health benefits of ginger is a well-known digestive aid. It can settle the stomach, rid the body of gas and help with nausea. The secret is a substance called gingerol. It acts as an antibacterial and can help you get rid of periodontal bacteria. When it comes to periodontal disease, men are more likely to have it than women. As a result, the bacteria not only lives in the teeth and gums but is transported through the digestive tract when you eat. Gingerol has antibacterial properties that fight oral bacteria to help keep your mouth safe and lessen the chance of periodontal disease.

Inflammation is a completely natural process in the body that can become corrupted. When you have an external wound, it swells, becomes red and hurts until it's healed; that's the regular temporary process. But in too many cases, inflammation can be widespread throughout the body and that process of repair becomes continuous. That type of inflammation is responsible for many other chronic illnesses such as arthritis, and it can also damage the body. Ginger is a natural anti-inflammatory that helps the body fight this chronic inflammation as well as support the body as it deals with the pain of arthritis.

A number of cancer treatments cause nausea and vomiting as well as other digestive issues. Ginger can be used safely to help patient digestion and food retention as well as provide some mild pain relief. And because it's an anti-inflammatory it prevents pre-cancerous tumors from creating the ideal environment for further growth.

With all of these benefits as well those that have yet to be discovered by western medicine, it's no wonder ginger has been such a staple in Traditional Chinese Medicine and Ayurveda.