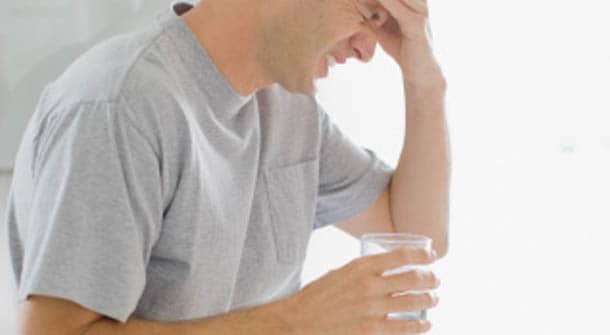 Hangover cures, Sure a night of heavy drinking, games and roughhousing with the boys is fun, but come morning that night of revelry isn’t sitting so pretty when you’ve got your head in a toilet and a massive headache, now is it? For those morning afters when you’re seriously reconsidering the possibility of never touching a bottle of Jose Cuervo again, a few tried and true hangover cures can help you get back into the swing of things without feeling like you’re going to keel over at any minute.

Rehydrate Yourself (But Not Too Quickly)

One of the biggest reasons a “hangover” occurs is because you’re body is dehydrated after a night of alcohol that sucks up the moisture in your body. So a surefire cure is to rehydrate yourself, but to do it slowly as gulping down a gallon of water in one fell swoop will just add to your misery, not fix it. It’s best to drink an 8ox glass of water ever hour after you wake up until you feel like yourself again as this allows your body to properly absorb the water without causing your stomach to feel bloated and overfull.

Drink a Bottle of Gatorade

In between your water rehydration routine grab a bottle of Gatorade as the salt in the sports drink can help your body to absorb the water quicker and help “cure” you of that listless, achy, queasy feeling that is so common during a hangover.

Use the Right Pain Killers

One mistake many people make when trying to ease a blaring headache and an achy body during a hangover is use the wrong pain killers to do it. Acetaminophen (Tylenol) can hurt your body rather than help it recover during a hangover because the alcohol disrupts your liver’s ability to remove the toxins found in acetaminophen (Tylenol) and aspirin can upset a stomach that is already a little nauseated. The best choice is ibuprofen as it relieves pain, digests easily and isn’t affected by your liver’s disruption due to the alcohol.

There is a common assumption that a greasy meal will help to cure a hangover which is somewhat true, but not quite. The truth is that the best meal to help cure a hangover is eating easily digestible carbohydrates (such as oatmeal) with a side of protein (maybe a little peanut butter in your oatmeal) and a few eggs. Researchers have found that easily digestible carbohydrates help to quickly improve your mood and memory during a hangover and the amino acid cysteine found in eggs can help your liver to get back into a normal routine and flush your body of the alcohol all the quicker.

A Few Cups of Joe

Coffee is a great hangover cure as it can help make you more alert after a night of debauchery and ease the dilated vessels in your brain caused by lots of alcohol. It is best to have a cup or two during your breakfast, but to limit yourself to no more than 2 cups of coffee as any more will just inhibit your body from recovering from the dehydration caused by the alcohol.