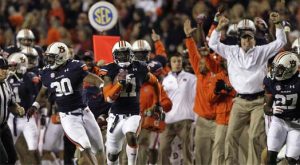 An impromptu field goal return, a valiant effort by Michigan, and a stunning 57-yard run in Columbia, Mo., have clouded the BCS Championship picture as Thanksgiving rivalry weekend did not disappoint.

The new BCS rankings took the biggest jolt when Auburn’s Chris Davis fielded an Alabama 57-yard field goal attempt on the game’s final play and promptly returned it 100 yards for the game-winning touchdown. The win leaves both Alabama and Auburn 11-1 on the season and propels the Tigers into next week’s SEC championship game.

Auburn tied the game with just 32 seconds to play when QB Nick Marshall hit Sammie Coates for a 39-yard TD. Alabama moved the ball into Auburn territory and was granted a chance at the field goal when officials put one second back on the clock after RB T.J. Yeldon had gone out of bounds as time ran out.

Ohio State, which will most likely be the biggest benefactor of the Alabama loss, had a tough time with rival Michigan. Leading 35-21 in the fourth quarter, the Buckeyes gave up two Devin Gardner touchdown passes to allow the Wolverines to tie the game with five minutes to play. Michigan could not stop the Buckeyes ground game (393 yards rushing) and RB Carlos Hyde scored on a one-yard run with 2:20 remaining.

But Michigan would not go away. Gardner led Michigan down the field quickly and with 32 seconds left, hit Devin Funchess with a two-yard TD pass. Head coach Brady Hoke opted to go for the win, but Gardner’s pass to Drew Dileo fell incomplete on the two-point conversion attempt.

In Columbia, Missouri RB Henry Josey broke through the Texas A&M defense and scampered 57 yards to lead the Tigers to the SEC East title. Josey’s run came with just 3:24 left in the game. Missouri (11-1) will meet Auburn for the SEC championship.

With Florida State’s easy win over Florida, the Seminoles will likely be the new No. 1, while Ohio State, even with its close win, should move into the No. 2 slot. Auburn and Missouri should move up a spot into No. 3 and 4, respectively, but it will be interesting to see where Alabama falls.

What is even more interesting is the fact that both FSU and the Buckeyes have conference championship games remaining. The ‘Noles will take on Duke (10-2) and Ohio State gets Michigan State (11-1). Should either, or both, lose, the BCS title picture becomes even more murky.