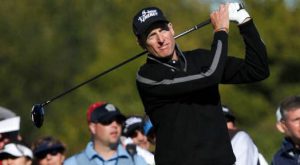 Jim Furyk may not be a household name in golf, but he surely will be for at least this weekend. Furyk became just the sixth player in the history of the Professional Golfers Association (PGA) tour to record a 59. Furyk had his historic round in the BMW Championship on Friday near Chicago.

Furyk shot birdies on two of his last three holes played to cement himself in the record books. The Pennsylvania native needed a birdie on the par-4 ninth hole where, after knocking a gap wedge to within three feet, he stepped up and knocked it home.

A 16-time winner on the PGA Tour, Furyk has just one major victory to his credit. He won the 2003 U.S. Open, the lone major title of his career. His last win was The Tour Championship back in September of 2010 when he defeated Luke Donald by one stroke.

The PGA tour has not seen another 59 score since Stuart Appleby at the 2010 Greenbrier Classic. It was also a bit of redemption for the former University of Arizona All-American. After blowing a hole at the U.S. Open in 2012, a double bogey cost him the World Golf Championship, he finished the Ryder Cup with a bogey-bogey which lost him an important match, and he blew a one-shot lead at the PGA Championship just last month. To make matters worse, for the first time in 15 years Jim Furyk was left off the U.S. Presidents’ Cup team for the PGA Championship.

Tiger Woods, a household name in golf, also played Friday and shot a 70 to leave him five shots out of the lead. That all changed when it was learned that he had moved his ball while trying to remove twigs from around it on the very first hole.

What was even more amazing was Furyk’s effort came during a very windy day on the golf course. The round of 59 leaves Furyk in a tie with Brandt Snedeker, who began the day nine shots ahead of his closest competition. Play continues Saturday with both Snedeker and Furyk tied at 11-under.

The next best score in the second round, which was played earlier to day, was a 65, shot by Jimmy Walker and Jordan Spieth.