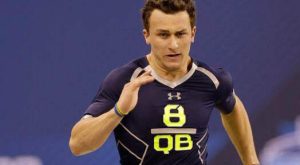 Johnny Manziel signed his first contract, not with a professional football team, but with Nike, the world’s leader in shoes and branded apparel. The financial terms of the deal were not reported, but it is believed that Johnny Football will receive the highest deal among all NFL rookies this year.

The multi-year deal was worked out by Maverick Carter, who is the longtime friend and business manager of LeBron James, and Fenway Sports Group. Nike was not the only shoe and apparel company bidding on the former Texas A&M star. Under Armour, Adidas, and New Balance’s Warrior brand had all pitched the Manziel camp to earn his marketing rights.

The landing of Manziel is a big catch for Nike, which also owns the marketing rights for NFL quarterbacks such as Drew Brees, Russell Wilson, Aaron Rodgers, and Colin Kaepernick. The new deal with the former Heisman Trophy winner will reap millions for Nike, which is also the official uniform supplier of the NFL.

The deal will also bring millions to Manziel who is likely a top five draft choice in the upcoming NFL draft later this spring. It is possible that he could be the No. 1 overall pick, though it does not appear that the Houston Texans, owners of that first pick, have much interest in Manziel.

Of the first five teams selecting in the draft, four are in desperate need of a quality quarterback. While Houston is one of those three, they might be more likely to select South Carolina DE Jadaveon Clowney and take a QB later in the draft. It is possible that they may even take Central Florida QB Blake Bortles, a prototypical NFL QB.

Both the Oakland Raiders and the Cleveland Browns need quarterback help as do the Jacksonville Jaguars, who pick third. Should Houston stick with Clowney, St. Louis, who has Sam Bradford at QB, will likely take Auburn offensive tackle Greg Robinson. That would leave the Jags to select the first QB of the draft, which is likely to be Nike’s latest catch, Johnny Manziel.