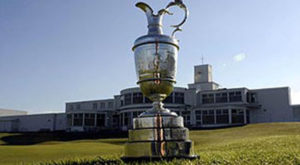 With a final round 66, Phil Mickelson came back from five strokes behind and capture the 2013 British Open title, his first-ever, the fifth major victory of his stellar career.

Mickelson birdied four of the last six holes and shot a 32 on the back nine to match the best round in the entire tournament. Of the last 11 groups to play Sunday, Mickelson was the only to break 70.

The leader going into the final round, Lee Westwood, blew a five stroke lead shooting 75 to drop into a tie for third place. Tiger Woods, who was two shots back before the final round, shot a 74 and increased his majors winless streak to 17. Woods wound up tied for sixth.

It was a bit of relief for Mickelson who finally overcame the Open. In his previous 19 appearances, he has managed just two Top 10 finishes. He continued the greatness that come to know Muirfield, the legendary course in Gullane, Scotland. Since World War II, every winner of the Open Championship is in the Professional Golf Hall of Fame. Mickelson became the first to win the title while already in the Hall of Fame.

With the 42nd career PGA Tour victory of his career, Mickelson moves back to No. 2 in the world. It is the first time since 2010 that he has been ranked that high. Mickelson has never been No. 1.

In claiming the golf’s oldest trophy, the Claret Jug, Mickelson claims the third leg of a career Grand Slam. He has three Masters victories, a PGA Championship win, and now is the winner of the 142nd Open Championship.

Lefty won the Scottish Open a week ago and entered the British Open with a solid, yet average first round. He played well yet was still five strokes behind on an amazingly difficult course and 18 holes to go. Through the first six holes, Westwood was still 3-under par but never made another birdie and bogeyed four of the last 12 holes.