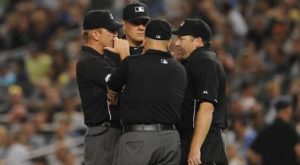 From the seventh inning on, umpires will have the ability to trigger a review of any questionable plays only if managers have used up all of their challenges. The current rules on any questionable home run will remain in place and they will continue to be reviewed in that manner.

Plays such as as a ground rule double, catcher's interference, and a batter being hit by a pitch will all be reviewable. The list goes on to include most of the more controversial calls in baseball, such as the "fair or foul" call on a ball hit to the outfield.

As part of the agreement, the umpires association will hire eight new umpires (a total of two new crews) and will use a rotation of existing umpires to staff the replay center. The league was considering using former umpires and umpire supervisors.