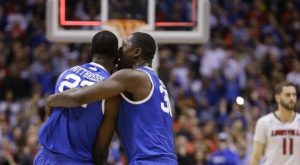 Russ Smith equaled his career-high with 31 points to lead Louisville to the Elite Eight with a 77-69 victory over 12th-seeded Oregon. The game was not as close as the score indicated as the top-seeded Cardinals jumped out to a 16-point first-half lead. The Ducks, to their credit, made a game of it by cutting the score to 70-64 later in the second half, but Chane Behanan threw down a monstrous dunk that quickly quieted Oregon and put the game out of reach.

Kevin Ware added 11 points and Gorgui Dieng had 10 points and nine rebounds for Louisville. Smith shot 9-of-16 from the floor and 12-of-14 from the free throw line and now holds the school record for most points in the first three NCAA tourney games with 81. The Cardinals will face Duke in the Midwest Region final on Sunday.

Trailing by five late in the second half, it appeared Michigan would be checking out of the NCAA tournament but a Trey Burke three-pointer sent the game to overtime where the Wolverines edged No. 1 seed Kansas, 87-85, to advance to the Elite Eight.

Burke, who was held scoreless in the first half, hit the game-tying three-pointer with just two seconds remaining in the game to force the overtime. Burke scored all 23 of his points in the second half and the extra session. Freshman Mitch McGary led Michigan with a 25 points and 14 rebounds. It was McGary’s second double-double of the tournament. Ben McLemore had 20 points for Kansas who finishes the season 31-6. It’s Michigan’s first trip to the Elite Eight since 1994, the days of the Fab Five.

A stifling second-half defense and 24-of-26 shooting from the free throw line gave coach Mike Krzyzewski and his Duke Blue Devils another trip to the Elite Eight with a 71-61 victory over Michigan State. Slowing down Seth Curry was one of the keys for the Spartans, but Curry wound up with a game-high 29 points and hit 6-of-9 shots from three-point range.

The Cinderella run for Florida Gulf Coast University came to an end as a 16-0 Florida run took the air out of the Eagles as the Gators advanced to their third consecutive Elite Eight with a 62-50 win. Coach Andy Enfield’s Eagles jumped out to a 15-4 lead to start the game but the No. 3 seed Gators erased that lead holding FGCU to one shot in their 4 ½-minute run late in the first half.

Mike Rosario had 15 points to lead Florida while Scottie Wilbekin added 13 and Casey Prather contributed 11 points off the bench. The high-flying Florida Gulf Coast team, which came to be known as “Dunk City,” got 14 points from leading scorer Sherwood Brown and 12 from Chase Fieler. FGCU wraps up the best season in school history at 26-11.