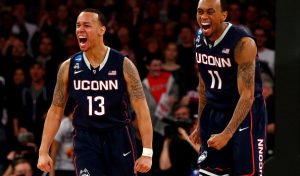 Connecticut head coach Kevin Ollie has yet to lose an NCAA Tournament game. Kentucky’s Aaron Harrison just keeps hitting game-winning three-pointers. The Huskies, and Ollie, are now 5-0 in the tourney after a 63-53 win over the tournament’s No. 1 overall seed, Florida, and will face the Wildcats, a 74-73 winner over Wisconsin, in Monday’s national championship game.

The Gators, riding a 30-game winning streak, picked the wrong time to play their worst offensive game of the season. Southeastern Conference Player of the Year Scottie Wilbekin scored just four points and had one assist and could never find a rhythm all night long.

Meanwhile, the UConn backcourt continued to shine as Shabazz Napier and Ryan Boatright combined for 25 points. DeAndre Daniels recorded his second double-double of the tournament with 20 points and 10 rebounds to lead the Huskies. Boatright finished with 13 points and six rebounds and Napier scored 11, dished out six assists, and had four steals for the winners, now 31-8.

Ollie, who took over at UConn last season after the retirement of the legendary Jim Calhoun, led the Huskies to their fifth straight win after losing to Louisville in the finals of the American Athletic Conference Tournament. The Huskies were ineligible for the postseason last year.

While Florida took an early lead, Connecticut finished the first half with a 21-6 run and then took command of the game in the second half. The Huskies are now 7-1 all-time in the Final Four. UConn was the national champion just three seasons ago in 2011.

Patric Young led Florida with 19 points. Fellow senior Casey Prather had 15 points and grabbed six rebounds. Those two, along with Wilbekin and forward Will Yeguete, finish their brilliant careers having won 120 games, including three trips to the Elite Eight and one to the Final Four. The Gators finish the season with a school record 36 wins, 36-3 overall, with two of those losses to UConn.

In Saturday’s second game, the Kentucky freshmen once again proved their superior athleticism can beat just about anybody. The Wildcats’ first-year players scored 66 of the team’s 74 points. With the game tied at 71, Wisconsin’s Traevon Jackson was fouled by Andrew Harrison on a three-point attempt. The Badgers as a team shot an NCAA record 95 percent from the free throw line, but Jackson missed one of three to give Wisconsin a 73-71 lead.

That set the stage for Aaron Harrison’s game-winner. Harrison hit the three, only Kentucky’s second of the night, from the left wing with 5.7 seconds to play. Jackson had a chance to win it for Wisconsin but missed at the buzzer.

James Young led Kentucky with 17 points. He quietly grabbed five rebounds and hit 6-of-7 from the free throw line. Julius Randle added 16 for the winners.

Ben Brust and Sam Dekker led Wisconsin, each with 15 points. Jackson had 12 and Bronson Koenig added 11 off the bench for the Badgers who finish the season 30-8.

Eighth-seeded Kentucky will face seventh-seeded Connecticut in the tournament final on Monday night. It is the highest combined seed total (15) since the NCAA began seeding in 1979.