The First Fan Fills Out The First NCAA Tournament Bracket 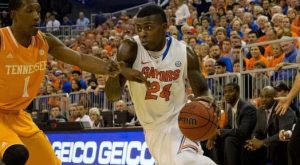 The nation’s first college basketball fan, President Barack Obama, once again has shared his NCAA tournament bracket. “Barack-etology,” as it has become known was revealed Tuesday night on ESPN’s Sportcenter.

It is the sixth straight year that the Commander in Chief has selected his NCAA tournament picks on ESPN and the president has done fairly well. He has correctly picked one national champion – North Carolina in 2009. His bracket last year placed him in the 74.4th percentile of ESPN’s Tournament Challenge.

Since announcing his picks on ESPN, the president has selected Kansas, in both 2010 and 2011, North Carolina again in 2012, and Indiana, last year, to win the tournament. He correctly picked Louisville to make it to the final last year, but went with the Hoosiers to win it all.

The president’s Final Four is solid with overall No. 1 seed Florida winning the South Region. He selected one other top seed, Arizona, to earn the right to go to the Final Four. The leader of the free world then went with two picks that seem pretty popular in the Midwest and East regions.

In the Midwest, Wichita State is the top seed, but faces a tough road to get to the Final Four. One roadblock is the defending national champion, Louisville. The No. 4 seed in the region, the Cardinals won the American Athletic Conference tournament and are a favorite to get back to the Final Four. The president thinks so too.

Virginia, winners of the ACC regular season and conference tournament titles, is the No. 1 seed in the East. President Obama, and many others around the nation, like Michigan State though. Also a No. 4 seed, the Spartans won the Big Ten Conference tournament championship and coach Tom Izzo has led MSU to six Final Fours.

The president has also done very well with choosing upsets in the first round of the tourney. Since 2008, President Obama has selected 21 different double-digit seeds to pull upsets in the opening round. He has been right on 11 occasions. In 2011, he picked all four major first-round upsets.