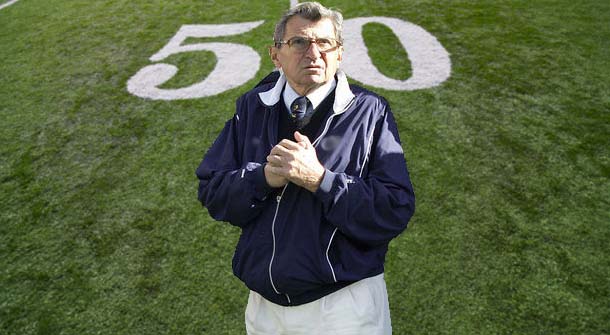 We have been bombarded with information regarding Penn State and the alleged sex abuse allegations against Jerry Sandusky. When the news broke, most of us couldn’t get enough and wanted to know all the details. Everyone was on YouTube, twitter, ESPN, talk radio and any and all mediums that had a take on the largest story to hit college athletics.

Joe Paterno and his legacy in College Football

To see what is happening in Happy Valley is quite eye opening. The all-time wins leading coach in all of college football who is a God in College sports has not formally spoken to the media. He was hastily fired amid the accusations and all because of the attention Penn State University has been receiving. The coach Mike McQueary, who was the graduate assistant who witnessed an appalling act by Jerry Sandusky, was held out of the game Saturday and is on administrative leave. The students almost rioted when they heard the news that Joe Paterno (JoPa) was fired.

Was it fair, is he really to blame?

It leads me to the legacy of Joe Paterno. Did he do enough? If it had been his grandchild in the shower with Sandusky, would he have done more? It looks an awful lot like a few underprivileged children are being sacrificed to save the reputation of an institution and its legendary coach.

If you have any thoughts or opinions on the whole matter we urge you to read the grand jury report. Rick Reilly also wrote a thought provoking article when he interviewed Sheldon Kennedy, former abuse victim and NHL player. The more you can read and understand the more informed you will be on the whole situation as the investigation and the legalities play out.

In my mind, there is no tolerance for sexual abuse to children.As many of us are parents and can’t even fathom what we would do if we found someone inappropriately touching them. One thing we keep going back to Sandusky and McQueary. The alleged incident happened in 2002. So for the last 9 years the two have seen each other a lot. It was reported that Sandusky was working out in the football complex as recent as 10 days ago. How McQueary could have looked Sandusky in the eye knowing what they both witnessed. How could Joe Paterno go about business as usual these last 9 years knowing what Mike McQueary told him on that Saturday back in 2002?

Again it takes us back to the same conclusion. The institution is bigger than the lives of innocent children. We live in America and we have to protect our children.