The Legacy of Ray Lewis Continues 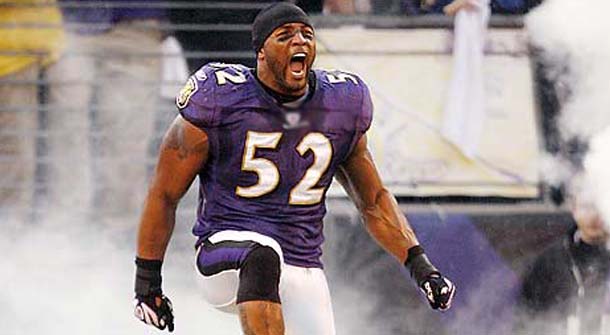 Ray Lewis is a lot like Biblical king, David, so much so that the Ravens’ middle linebacker of 17 years compares himself to the man that slayed Goliath. Lewis has been down, outmatched, the underdog, but clearly he has never been out.

Lewis has been the talk of the NFL as of late after announcing his retirement at the end of this season, one in which the former defensive MVP missed 12 games due to a torn triceps. Rightly so, since Lewis will go down in football history with the greats – Butkus, Nitschke, Huff, Lambert, and the like.

The Ravens’ star was a key in the 38-35 double-overtime win over Denver Saturday. Lewis helped the Baltimore defense limit the Peyton Manning-led Broncos to just 3.0 yards per carry. The former Miami standout will continue his amazing career next week in the AFC championship game and will have another shot at a Super Bowl.

A high school All-American while at Kathleen HS in Lakeland, Florida, Lewis became a starter at Miami midway through his freshman season and made an immediate impact both at linebacker and as a team leader. After winning All-American honors as a sophomore and a junior, Lewis decided to forgo his senior year and entered the NFL draft. He was selected in the first round (No. 26)

Just as in Miami, Lewis, the fifth linebacker taken in the ’96 draft, made an immediate impact on the Ravens. He led the Ravens with 110 tackles and his 15 tackles for loss was tops in the NFL. In 2000 Lewis led what many believe may be the best defense to have ever played in league history. The Ravens gave up the fewest points (165) in a 16-game season and the fewest rushing yards (970). They recorded four shutouts, just one shy of the single-season record. The underdog Ravens went on to defeat the New York Giants, 34-7, in Super Bowl XXXV and Lewis was the game’s MVP. He also won the league’s Defensive Player of the Year, was a unanimous All-Pro selection, and was named a starter in the Pro Bowl.

Prior to the 2000 season, after Super Bowl XXXIV, Lewis was involved in an altercation that led to the stabbing deaths of Jacinth Baker and Richard Lollar. Lewis’ attorneys negotiated a plea agreement in which murder charges were dropped against Lewis in return for testimony against two of Lewis’ companions in the altercation.

Since the incident, Lewis has solidly continued his reputation as a leader and the most intimidating middle linebacker in the game. In addition to his Super Bowl MVP, he has been the league’s defensive player of the year twice, a seven-time first-team All-Pro, and has been named to the Pro Bowl thirteen times. Like the king he compares himself to, Lewis will be remembered as an inspirational leader and someone who was able to overcome adversity time and time again. He will go down as one of the game’s all-time greats. Lewis will be a favorite to be elected to the Hall of Fame as soon as he is eligible. Not bad for a once undersized, underappreciated underdog.