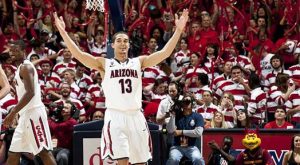 On the first night of action in the Sweet 16 in the NCAA tournament, Dayton, Wisconsin, and Florida put away their opponents early and cruised to victories. Arizona, on the other hand, had to hang on to a slim lead as the Wildcats defeated San Diego State.

Dayton (26-10) started the night off with a furious display in defeating Stanford 82-72. Head coach Archie Miller used 12 different Flyers who wore down Stanford. Jordan Sibert led Dayton with 18 points and Kendall Pollard added 12. Dayton’s bench ended up outscoring Stanford’s 34-2. Chasson Randle led the Cardinal with 21 points, but only shot 5-of-21 from the field. Dwight Powell added 17 points and Stefan Nastic had 15 for Stanford (23-13).

The night continued with a display of defense by Wisconsin that shut down one of the hottest teams in the tournament, Baylor. The Badgers had an easy time with the Bears, winning 69-52. Head coach Bo Ryan’s Badgers put on a clinic in holding Baylor to just 16 points, a season low, in the first half. Ahead 29-16, Wisconsin put the Bears away in the second half. Seven-foot center Frank Kaminsky led the Badgers (29-7) with 19 points and six blocked shots. Wisconsin destroyed the vaunted Baylor zone defense shooting 52 percent for the game. Cory Jefferson led Baylor with 15 points.

Top-seeded Florida (35-2) defeated UCLA 79-68 to reach its fourth consecutive Elite Eight. Michael Frazier II hit five three-pointers and scored 19 points for the Gators. Scottie Wilbekin added 13 and fellow senior Casey Prather had 12. Florida has now won 29 straight. Their last loss was on Dec. 2. UCLA (28-9) got 17 points from Jordan Adams and 11 from Kyle Anderson. The Bruins are 0-4 against Florida under coach Billy Donovan, losing all four times in the NCAA tournament.

The day’s final game saw Arizona struggle, especially Pac-12 player of the year Nick Johnson. Johnson missed all 10 of his shots and had not scored until the final 2:45 of the game. Johnson scored all 15 of his points in the final minutes, mostly on free throws. The 6-3 junior hit 10-of-10 from the free throw line as the Wildcats went on to beat San Diego State, 70-64. Freshman Aaron Gordon and Rondae Hollis-Jefferson each added 15 points for Arizona (33-4). Xavier Thames had a game-high 25 points for the Aztecs, who finish the season 31-5.

Florida will take on Dayton and Arizona will battle Wisconsin on Saturday for a berth in the Final Four.