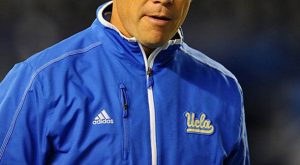 In the crazy recruiting world of college football, UCLA continues the latest trend, offering scholarships to high school underclassmen. Lindell Stone, a 6-foot-2, 190-pounder, who just finished his eighth-grade year at Dawson Middle School in Southlake, Texas, was offered a scholarship by Jim Mora Jr. and his UCLA coaching staff.

In recent years, it has become more common to offer a scholarship to the high school sophomore, who will be a junior in the fall. What makes offers like that of UCLA to Stone, is that the young Texan has yet to play a down of high school football.

Stone will enter Southlake Carroll High School this fall and if the school name sounds familiar, it should. The school has produced some big time quarterback talent. Greg McElroy, now with the New York Jets, was a highly touted prospect that led Southlake Carroll to a Texas 5A state championship and then led the University of Alabama to a 14-0 season in 2009 capped by a BCS national championship. The Kansas City Chiefs’ Chase Daniel was a two-time state champ at Southlake Carroll and an All-American at Missouri.

Recently, three-star prospect Kenny Hill, class of 2013, signed with Texas A&M and now Stone hopes to be the next in the QB tradition at Southlake Carroll. He has participated in the Elite 11 QB camps run by former NFL QB and ESPN analyst Trent Dilfer. While Lindell Stone didn’t make the national competition, he surprised many with his performance at the regional competitions.

The young QB is described as a pocket-passing QB with a strong arm that continues to develop. His performance at the Elite 11 camp put him on the map and when the offer from the Bruins came, he wasn’t surprised. Stone’s father, Ted, had been in contact with UCLA offensive line coach Adrian Klemm and director of football operations Matt Bernstein.

Lindell Stone joins Nathan Tilford and Dylan Moses as eighth-graders who have been offered football scholarships. Tilford, from Upland, Calif., is a 6-2 wide receiver who was offered a scholarship by USC and Dylan Moses is a 6-2, 225-pound 14-year-old who has offers from Alabama, LSU, Texas, and others.