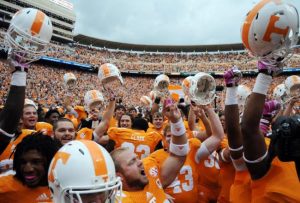 While top-ranked Alabama cruised to a victory over Kentucky, several other College Football top 25 teams struggled and a few, including No.5 Stanford, fell victim to upset.

Stanford, 5-0, was cruising through its schedule setting up another showdown with Pac-12 rival Oregon when it ran into Utah in Salt Lake City. Utah QB Travis Wilson was 23-for-34 for 234 yards and two touchdowns and the Utes defense came up with a late goal-line stand to shock the Cardinal, 27-21.

Utah took a 21-14 lead at the half then added two Andy Phillips’ field goals to go ahead 27-14 early in the fourth quarter. Stanford QB Kevin Hogan found Devon Cajuste for a seven-yard TD pass with 9:22 to go in the game. Hogan then drove the Cardinal to the Utah six yard line with a minute to play but couldn’t complete the comeback. It was Hogan’s first loss as a starter.

In Athens, Ga., No. 25 Missouri proved its 5-0 start was no fluke when the Tigers defeated No. 6-ranked Georgia, 41-26. Thanks to a 21-point second quarter, Missouri raced out to a 28-10 halftime lead. But Georgia, behind senior QB Aaron Murray, rallied to cut the lead to 28-26 early in the fourth quarter. To make matters worse, Missouri starting QB James Franklin left the game with a shoulder separation.

Missouri responded though as backup QB Maty Mauk pitched the ball to Bud Sasser who threw a beautiful ball to L’Damian Washington to put the Tigers up for good. The bad news for Missouri is that Franklin will miss the rest of the regular season.

In Dallas after three years of futility in the Red River Rivalry, Texas got an outstanding performance from its defense and had two 100-yard rushers as the Longhorns defeated No. 12 Oklahoma, 36-20. Texas head coach Mack Brown has been through a lot this season, firing his defensive coordinator after an early season debacle at BYU. This win puts the Longhorns back on track.

Johnathan Gray rushed 29 times for 123 yards and Malcolm Brown had 120 yards on 23 carries. Texas ran for 255 yards and totaled 445 for the day, while holding the Sooners to 263 yards of offense.