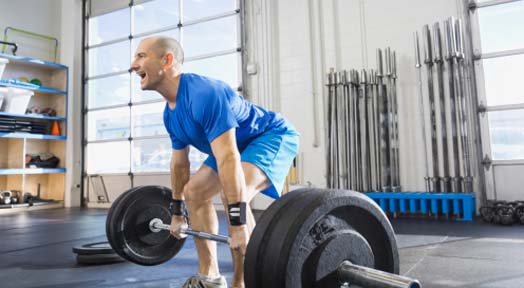 The Russian Deadlift exercise is a traditional barbell type of training used by many professional weightlifters and bodybuilders in the fitness industry today. This training has been used effectively to train the legs thus increasing core strength through the growth of muscle tissue. During the exercise, the arms are positioned in front of the individual and hanging down while holding the weighted barbell. The leg muscles are used to perform the squat and stand positions while maintaining a proper balance of the barbell with the core.

The Russian Deadlift begins with the individual maintaining an upright position in front of a weighted barbell while standing with both feet positioned apart and slightly wider than the shoulder-width to achieve a seemingly modified squat position. The knees should be moderately bent with the back vertically aligned and the hips pressed back slightly. The head of the person should be positioned forward with the neck perfectly aligned with the spine and the chest held high and puffed up. While maintaining this modified type of squat position, the barbell is firmly gripped with both hands at shoulder-width apart ensuring the palms are in a position of facing the individual. The barbell upon lifting should be at a level in line with the center of the shins. Occasionally the weight plates used will observe the barbell at the shin-level which in this case would not require the weighted barbell to be lifted off the ground. While lifting, the majority of the weight of the barbell should be adequately directed towards the back of the heels, while exercising enough force evenly through the balls of the feet.

When performing the Russian Deadlift you will want to maintain the chest forward using the legs to lift the weighted barbell while bringing themselves to an upright position. Emphasis is placed on using the legs and core body strength to perform the lift ensuring the muscles within the upper and lower back are NEVER used. Using a weight that is too heavy may cause you to use your back to complete the lift. This can be very dangerous and can result in mild to a severe back injury so make sure the weight is challenging yet appropriate.

While in the upright position this posture is held for one count after which the individual will press the hips behind, bending the knees while lowering themselves into the squat position. While in the squat position, the back once again should be vertical and perfectly aligned with the neck. The weighted barbell is slowly lowered to the shin-level or possibly on the floor depending on the weight plates. Here the individual should be once again in the starting position of the exercise. The individual then quickly repeats the lifting motion of the weighted barbell to perform the second rep of the exercise completing as many reps as laid out in their training plan.

Fitness professionals have often stressed that beginners and even advanced lifters do not push the weight used beyond the point at which a slight stretch is felt in the hamstring. Relative to the flexibility of the individual this stretch may be felt at a number of varying positions. The weighted barbell additionally should be kept close to the legs maintaining a straight back. Performing the single leg Russian deadlift recognizing the improper technique has been found to place an undue amount of stress on the lower back of the individual creating a severe amount of discomfort and possible injury and as such beginners should always have a trained fitness professional on spot to instruct them on the correct technique to be used to perform the training exercise.