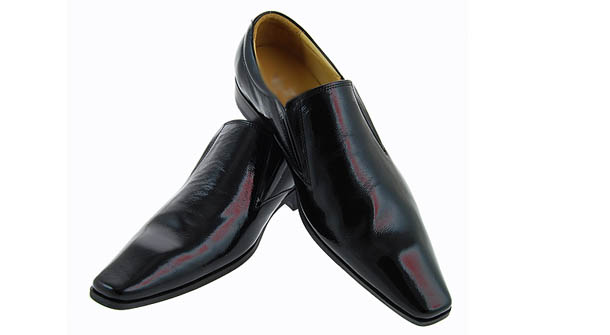 What's the point of pointy shoes. Like it or not, pointy shoes have made a comeback. They first started appearing in Europe and New York on the feet of ultra-suave, uber-fashionable gentlemen beginning back around 2007 or 2008. Now they are everywhere. From Calvin Klein, to Polo, to Zara, designers are passing off pointy shoes as haute couture—or at least, sophisticated and snazzy menswear. The style is even taking over the unassuming casual shoe. And in many cases, they shoes don’t just point—they bend upward at the toe. The pointy-shoe phenomenon isn’t new.

What's the point of pointy shoes

About 500 years ago—give or take a few hundred years—men were wearing pointy shoes that curled up at the toe as a fine complement to their tights and tunics. The points were a status symbol. The longer the point on the shoe, the more of a gentleman you were. So much so, that there were laws against lower-class citizens wearing toes curls that went past a certain length.

Pointy shoes was for certain class.

In the 1700’s pointy shoes became all the rage again for men of a certain class, along with giant powdered wigs, face makeup, ornately bedazzled coats and piles of lace ruffles. Yes, those were manly times, folks.

The style as gone back and froth for meany century

It took a while, but that trend eventually faded—until the 1950s and 60s, when winklepickers—pointed shoes based on medieval French shoes called Poulaines—were adopted as fashion by British rock-n-roll fans. The trend spread—in a less dramatic way—throughout the 60s. The Beatles famously wore pointed shoes with heels. And let’s not forget about the cowboys, who have mastered the pointy-shoe look for generations, with masculine aplomb.

Could the return op the pointy toe have anything to do with women?

Today’s pointy-toe trend in men’s shoes may be a response to the pointy-toe look women have been sporting for a few years, or it may just be an attempt by designers to go in a fresh new direction. Whatever the case, the look has garnered a number of supporters and detractors.

Pointed-toe men’s shoes do have a certain austerity and elegance to them,

It’s easy to see why the sleek, clean-lined look has a place in modern fashion. However, there are those who feel the look is silly, effeminate, and even reminiscent of “elf shoes.” And for those supporters who want to cite the above-mentioned cowboy boot, we have to say there’s a difference between a scruffy, dusty, creased leather boot that’s seen action out on the range and a carefully polished pointy dress shoe.

Whether you think they’re a fashion step forward.

Or you hope they’re a fad with a quick demise, it’s important to note a few things. Pointy-toed shoes will most likely only ever be a trend. If you’re the kind of guy who follows trends and takes pride in wearing the latest fashions, by all means, wear ‘em while their hot. But If you’re the kind of guy who sees the purchase of expensive shoes as an investment—the kind who likes to look sharp, but also likes to get great wear out of higher-end items—stick with round or square toes. They’re classics, they always look great, and you won’t have to worry about finding super-trendy clothes to match.