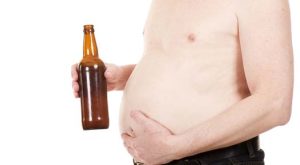 It doesn't take years of observation and personal experience, to come to the conclusion that a lot of guys really like beer. In fact many men love their beer; probably more so than any other alcoholic beverage (wine, vodka, etc).

How to enjoy your beer without getting a beer belly

Beer drinking might even be a big part of your social life and relaxation routine. There are great gastropubs where you can order specialty beers like Chimay, Sierra Nevada, Porter's, Ale's and so many more that taste much better to than your typical Bud Light. Unfortunately, beer consumption is most likely a major culprit towards weight gain in your mid section. You might notice all that indulging leads to gaining weight in places you never did before, like your belly! So why exactly does beer cause that "beer belly?”

Beer and your weight

Well for starters, beer contains a lot of calories. Your average domestic beer like Budweiser contains approximately 160 calories per bottle. When you get into the darker specialty beers, the calories are even higher. Because it's is consumed socially and eventually causes drunkeness (for lack of a better word), most people drink them freely not thinking about the calories.

Beware of the creeper pounds

Two beers every night adds up to about 2200 additional calories a week, or fifteen pounds to your stomach per year. Because beer is not recognized by your body as an efficient fuel source, it is metabolized as fat, inevitably reducing your body’s fat-burning process. In addition, the hops in beer contain phyto-estrogens which can promote weight gain.

Which beers are healthier

Beer is not all bad. Bottled beers in particular contain "live yeasts" which are composed of nutritious proteins and B vitamins. Beer has also been known to help regulate blood sugar levels because of its high levels of glucose tolerance factor. This does not mean you should replace your morning vitamins with a pint. Like most things, beer is best consumed in moderation.

Try cutting back gradually. Pay attention to how many beers you drink every time you go out with your buddies. Pace yourself by drinking a tall glass of water in between each beer. If you know you are doomed for failure on certain nights (birthdays, weddings, etc), make sure to get a good workout in before the binge.

Watch your calories in other areas, like food. Beer is not the sole culprit for weight gain, however, because of the high calories, it definitely doesn't help. If you really want to lose your belly you might consider only drinking  beer when there is a reason or occasion, like a wedding or an outing with friends. Once you start making these little changes in your brew drinking habits, you will most likely notice your waistline shrinking within weeks! Now that's a reason to celebrate!