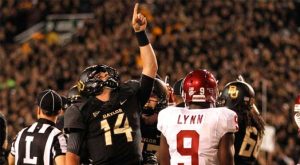 One of the biggest Thursdays in college football last night left Florida State a very happy program. No. 6 Baylor proved that it was worthy of its ranking as it handled No. 10 Oklahoma, 41-12, while No. 5 Stanford once again defeated No. 3 Oregon, 26-20. Oregon’s loss leaves no doubt now who will remain the No. 2 team in the country – the Seminoles.

Baylor got off to a slow start and actually trailed 5-3 early in the second quarter, but QB Bryce Petty took over and accounted for the next four scores of the game as the Bears pounded the Sooners. Baylor RB Lache Seastrunk and his running mate Glasco Martin both were injured so head coach Art Briles turned to Shock Linwood who shocked the Sooners’ defense for 182 yards on 23 carries. Baylor rushed for 255 yards in the game and totaled 459, a bit shy of the 718 that they had been averaging per game.

Petty, a junior, threw for 204 yards and three touchdowns and ran for two more. In the final minute of the first half, Petty scored on a one-yard run and then hit Antwan Goodley with a 24-yard TD pass with just 13 seconds remaining.

As much focus as has been put on the Bears’ offense, it was the defense that really came through. Oklahoma managed just 237 yards of total offense, including just 87 on the ground. QB Blake Bell threw two interceptions and completed just 15-of-35 passes.

Out in California, Stanford, for the second year in a row, crushed the national title dreams of Oregon with a convincing 26-20 win over the Ducks. In the past two seasons, Oregon has lost two games – both to Stanford.

The Cardinal did it again with a punishing running game and powerful defense. Running back Tyler Gaffney ran for 157 yards on a school-record 45 carries as Stanford pounded out 274 yards on the ground. Gaffney scored the game’s first touchdown, a two-yard run in the first quarter.

Stanford built a 23-0 halftime lead, the first time Oregon has not scored in a half in 55 games. It wasn’t until a Marcus Mariota to Daryle Hawkins 23-yard TD pass at the 10:11 mark of the third quarter that the Ducks got on the board.

Oregon then made it interesting with 5:08 left in the game. Stanford lined up for a field goal after another time-consuming drive. Oregon blocked the kick and Rodney Hardrick returned it 65 yards for a touchdown. The two-point conversion failed, but the Ducks cut the lead to 26-13.

Then, they recovered an onside kick just seconds later. Mariota led Oregon to the Stanford five-yard line, but they wound up with a fourth down play from the 12-yard line. Mariota escaped pressure and found Pharaoh Brown for the TD to pull the Ducks to within six points with 2:12 to play. Stanford recovered the subsequent onside kick and ran out the clock.